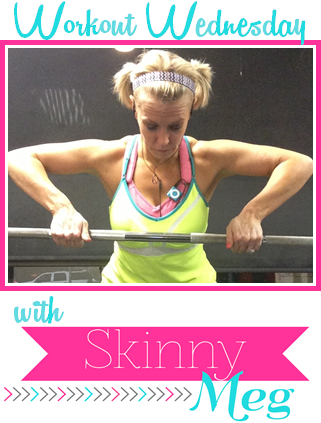 I am so excited to do this second link up! I found this link up on Mama Lauglin's Blog who had linked up from the host - Skinny Meg. Definitely pop on over to Mama's blog, or Skinny Meg's blog to see what great advice they have. When I first saw this link up, I knew I wanted to do it because I've been wanting to do an entry on my workout, and this link up gives me the perfect opportunity!

I grew up NEVER going to a gym, worrying about my weight, or even stepping on a scale. Even in high school, I had no idea how much I weighed. I had no reason to be worried. When I was at the missionary base and going to the base school, I would load up my backpack (probably weighed 20 pounds with all my school books) and walked to school every day. It would take me roughly ten minutes to walk to school. You can take a look at my school here. I would truck myself from class to class, carrying my heavy backpack with me wherever I went. Then, at 12:15, I would walk back up the hill (this time it took a bit longer because I was walking up the whole way) for lunch. Usually I'd eat lunch while watching a MacGyver with my brother, and then we'd both walk back down the hill to school. Then, I'd pick up my backpack, go to my classes all afternoon, and then truck back up the hill with my heavy load. I also had PE twice a week, and we always were doing running type sports like softball, basketball, rugby and track and field. Besides all my exercise walking to and from school, I would also walk anywhere I wanted to go - to the store, to the library, to a friends house, etc. Every now and then, someone might offer to give me a ride in their beat up car, but usually I would end up walking everywhere.
When I wasn't getting my exercise by walking, I was getting it by riding my horse, playing sports, and doing chores.
When I was in Yemli village, there was never an option to get a ride. We walked everywhere, and wherever we went, we would either be going uphill or downhill which of course means on the way back would be the opposite. Also - the walks my family and I took were usually at least 20 minutes away one way. For example, my Dad, brothers and I would hike down the mountain about half an hour to get to our favorite swimming hole. We usually did this once a week. Also, we would often hike to a neighboring village for church - usually at least a two hour walk if not more. I would also walk to get to my friends house down the mountain, and we would often play games of basketball or soccer. Exercise was not something I was lacking.
Then, I moved to the US - the land of un-exercizing and make-you-fat-foods. I didn't really realize that I had to do anything different to stay in the shape I had been in growing up. So I slowly began my decline into not-so-in-shape land and eating-unhealthy world. Eventually, it got to a point where I knew if I kept down that path, I would end up being overweight and unhealthy, so I knew I had to STOP!
I've bounced around to a lot of different gyms including the YMCA, Lifetime Fitness, and Snap Fitness but I never really felt like I could work out and feel good about it. I think a lot of it was because I felt overwhelmed by all the equipment (especially in the YMCA) and the types of people who were working out around me. The pattern was always the same - sign up to the gym, commit to working out at least three days a week, keep up my commitment for a month or at most two months, then finally quit going. I would feel terrible about not going, and then eventually just not go at all and all that money I was paying to the gym to help me stay in shape was just getting wasted. So, I'd cancel my membership and float around to some other gym.

About four months ago I stumbled upon Curves. I had heard about it before, but always was weary to check it out or even ask for information. I had heard all the issues - it's a scam, they make you commit to a year, it's just a bunch of old ladies who don't really care about working out, blah blah blah. I did, however, like their mantra of "No Men, No Makeup, No Mirrors." I decided to head into my local Curves and just take a look around.
I was surprised with how small the facility was. There were 13 machines in a wide circle separated by small boards they called recovery boards. I went and talked to the woman in charge and she walked me through each machine and how the program worked. Basically, you are on each machine for a total of thirty seconds. A voice comes through the speakers every thirty seconds and says "Change stations." When you hear the voice, you stop working out at your specific station (machine or recovery board) and move onto the next. There are thirteen machines and thirteen recovery boards. The idea is that you fully exhaust a muscle after working it for thirty seconds. Then you work cardio on the recovery boards. You do the full circuit twice which equals a little under a half hour. So, the idea is that you get a full body workout (strength and cardio) in thirty minutes. Then, there is a stretching machine in another room where you stretch out your muscles for five minutes.
I asked for a free week so I could try out the machines for myself before I made a commitment to work there. This time, I was committed to working out and NOT stopping after a few months. I was really worried about the year commitment though. What if I got sick? What if something unexpected came up? What if we moved overseas? I called up the owner and explained to her my hesitancy, and she was very understanding and told me if something came up, she would not force me to pay out the full year. That year commitment was more of a way to keep people committed - when they know they've committed to pay for a year, they are more likely to do their workouts. First issue solved.
Then, I was a little worried about not being able to work out well because people would just be talking around me and not moving through the circuit. That has only happened one time, and when it did, I just skipped the machine she was on and finished up the circuit, and then at the end I did that machine to catch up. Because everyone is following the same cues, it makes it really easy to keep moving.
I was also worried about not being able to work out and get sweaty. Let me tell you - that is the least of my worries now. You get out what you put in. While I'm on the recovery boards, I do jumping jacks, jump rope, stair stepping, high knees, and whatever else I can do to get my heart rate up. In just a couple boards I am sweating and breathing heavily. By the end of my workout, I am exhausted and am barely able to run in place. Every 10 minutes, the voice over tells you to take your heart rate. There is a large poster on the wall that tells you where your heart rate should be at - and mine is always above the suggested point. I know I'm getting a workout.
So - I went ahead and joined Curves. Looking back, I am so glad that I made that decision. Sometimes I'm embarrassed to tell people I work out at Curves because it has such a bad reputation for not being a good workout. For me, however, it's been the best workout I've gotten at a gym. I love being able to go workout and not have any men around. I love that I can go right when I wake up and not have to feel like I need to put make up on. I love the repetitive nature of the circuit, but also the fact that I can get out of it what I put into it.
The latest thing I've done is become a Curves Smart member. This was no extra charge, but it is like having a personal trainer pushing me on every time I work out. Basically, it's a little computer that is programmed to exactly my goals and it pushes me to reach those goals each time I work out. It also raises my goals once I hit them. This has been exactly what I've needed as far as motivation. I haven't been able to hit every one of my goals yet, but I am determined to get there.
So, if you are struggling with working out or not feeling comfortable in your gym, check out your local Curves. Just remember, you get out what you put in. If you go and chat to all your friends the whole time, you probably won't get much of a workout. But, if you go, sign up for Curves Smart, work hard on the machines, and get your heart rate up on the recovery boards every time, you'll get a great work out.