As some may have noticed, there has been a poll in the upper left hand corner of my web page. This is something I am going to do all the time now. There will be a new poll every couple weeks, and each poll will have something to do with a blog entry I will be writing.

This last poll had to do with what types of food you have eaten. Now, when reading your choices - poisonous spider, frog stomach, live grasshoppers or tree insides - you may have thought... those are NOT on my food pyramid. That may be true about YOUR food pyramid, but they are certainly on Yemli's food pyramid! Here is a SUPER simplified version of their food pyramid: 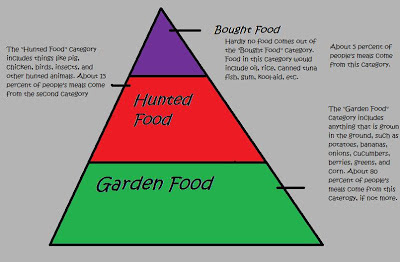 This is something I threw together really quickly without doing any real research, so I know that the percentages are wrong, and many people could argue - but based on where I grew up and how the people ate there, this is a simplified version of Yemli's food pyramid.
So, going back to my poll. All of those options are things that people in Yemli eat on a regular basis, and I have eaten as well. I can't say that I thoroughly enjoyed eating each one, but they are types of food.
The choices in the poll come from the garden and hunted food categories. I'll start with poisonous spider. According to all five people who took the poll, I am the only one who has ever eaten a poisonous spider. I have mentioned these spiders before. Their name is Anu Sining which means "Poison Man." 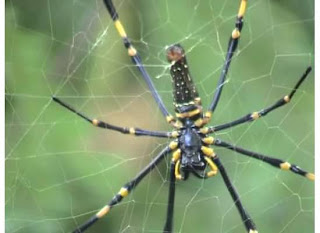 There is Mr. Poison. I have consumed this type of spider MANY times in my life. They are everywhere! Quite a few times, we had one of them make a web on our porch or by our water tank, so we would find grasshoppers and other unfortunate bugs to feed it. Anyways, because this spider IS poisonous, you can't eat the head. I guess its kind of like a snake - as long as you chop off the head, you can eat it because all the poison is stored in the head.
So, to hunt for these spiders, you go looking for webs. Duh :) A lot of times, Anu Sinings make their webs high up in trees, but sometimes they are lower on the ground too. Once you've located your unsuspecting Mr. Poison, you use your pointer and thumb fingers on both hands to pinch four legs each on the two sides of the spider. You have to do this at the same time, because if you don't, Mr. Poison could bite you and inject his venomous poison into you. NOT what I would call an appetizer....
Once you've caught him, you can either chop his head off right away or if you are a long ways from a fire, you can leave his head on to keep him fresh. (Yemli refrigerator)
Once you get to a fire, you chop off his head and chuck him in the fire. Easy as pie! Once the looks nice and crispy, you take it out and crunch away. You can eat the legs if you want to, but they are just kind of tasteless crunchy sticks. But - his butt tastes yummy! :)
The second choice - a live grasshopper - is actually something that people don't eat. I ate one once because my friend dared me to and didn't believe I would do it. So I asked her how much she would give me if I ate it live, and she said twenty kina (one kina is equal to about 33 cents) so I did it.
But in reality, Yemli villagers do eat grasshoppers - they just cook them first. When you go searching for grasshoppers, you need to look for green juicy looking guys. When a grasshopper comes to your mind, you probably think of the brown ones - but those aren't edible. Well - I guess they are edible, they just don't taste very good so they're not worth it. The green grasshoppers are larger and tastier, but they are a bit more difficult to find.
Usually, the green guys sit in tall grass - so you make your way over to some tall grass and just start sneaking up on green grasshoppers and catching them. Then you take a piece of thin grass and string the grasshopper onto the grass. I don't know how better to explain it than that. You insert the tip of the grass in between the head and body of the grasshopper. Usually it bleeds a bit, but then just wriggles around and seems fine. Who cares anyway - it's gonna get eaten.

Hopefully you can catch a couple grass-fulls. Once you're done, you head home to fire. To prepare each grasshopper, take its big hopper legs off and you can decide to take its head off or not. Then throw it in the fire just like the spider and let it get crispy yummy. Once its done, take it out, and if you didn't take the head of before, you can take it off now. And wallah - crispy grasshopper! By the way, according to the five people who took the poll, I am still the only one who ate an alive grasshopper.

The next item was a frog stomach. This is still in the hunted category, obviously, so you would need to head out and find a frog. You know where to look for frogs and how to catch them, so I won't go into that. Once you catch your frog, you head back home to your fire. Then, you kill Mr. Froggy. Basically, you just bang his head on a rock, and you have dead frog. I You-Tubed "How to kill a frog" to see if anyone else killed frogs that way, and what do you know! Someone does. Here is a great picture of what we would do to kill frogs before boiling them up.
BE ADVISED! DO NOT WATCH THIS IF YOU LOVE ANIMALS.
SERIOUSLY, DON'T.
PROCEED AT YOUR OWN RISK.

So, once Mr. Froggy is dead, you pop him into a pot of boiling water, or you can throw him in the fire, or put him on top of the fire grate. Then, you let him fry up to - you've got it - crunchy goodness. Now, I have to say that I am not a huge fan of frog stomach because it really never gets crunchy. It's just this soft fishy bitter tasting piece of meat. So - I would stick with the frog legs next time. According to the poll, I am also the only one who has eaten a frog stomach.

Next comes an item from the first food category - grown food. The option was "insides of a tree." To be more specific, it would be the insides of a sago palm. I googled sago palms because I wasn't sure what the English name for the tree was. The pictures for a sago palm were not correct, so I did some searching. And, supposedly, the tree that sago from Yemli is taken from is actually called Metroxylon Sagu... so whatever.

Harvesting sago is a very long process, but it also only happens once or twice in your lifetime. Sago trees don't produce every year. Well - I'm sure they do, but the part that you eat doesn't regrow every year because the tree is demolished when the sago is harvested. Don't worry, I'll explain. 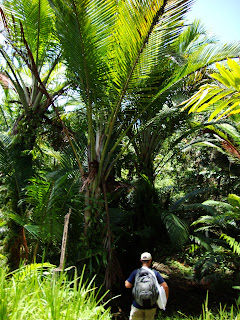 In the picture above, the group is walking into the area where the sago trees will be harvested. There are palm trees there, but then you can see a few shorter palm tree looking things - those are sago trees. 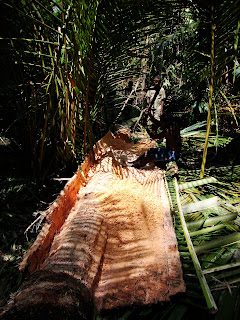 Once you get into the sago tree forest, you cut down your trees. Then rip off the bark, and inside is what will become sago. 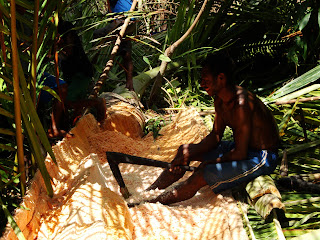 Then, you have to turn all the insides of the tree into powder. So they use that machete looking knife thing to do that. 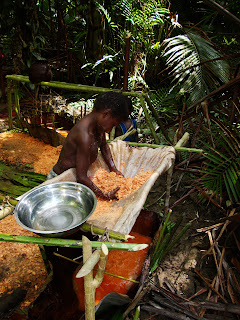 Once the tree insides have all been powder-ized, it is then strained and washed to get all the dirt and other impurities out. By the way, while harvesting the sago, you often find sago grubs. These are a yummy snack and can be eaten raw or cooked. Often they will eat them right there, and other times they collect them all and cook them up crispy for lunch. Mmmmm!


Ok - so back to harvesting and processing the sago. After the original strain, you need to strain the sago again, making sure to get all the impurities out and get it fresh and clean. While cleaning it, you also need to knead it and push it around - making it more like a flour. 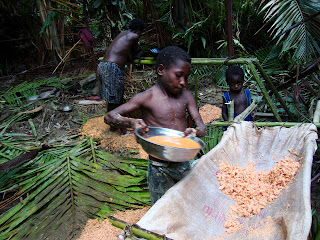 You continue to knead the sago and strain it until you have a fine powder, and then you lay it out on tarps or leaves and let it dry in the sun. The result is sago powder! Then, you can make ALL kinds of things with your sago powder. Here is a small list:
Sago Pancakes
Sago Balls
Fried Sago
Sago Soup
Sago Bread
And the list goes on. Sago itself is pretty tasteless, so you usually put other things in with it like ginger, coconut, onions or salt. You can boil it, fry it, shape it, or just use it like a powder. When you cook it, it gets gooey - kind of like if you boil tapioca starch or even cornstarch. I haven't been able to find sago in the States, but I use tapioca starch strained with coconut milk to make "Island Girl's Pretend Sago Cuz She Misses Real Sago."
Of all the people who voted, the most said that they have eaten the insides of a tree. Interesting! I wonder if all those people were thinking of the sago palm or if there are other insides of trees that are edible. I would love to know!
Lastly, two people voted "None of the Above." Interesting. :)