I just turned 23. I feel like I should feel older and wiser, but I don't. I tried to think about when I was 5 and what I thought I'd be doing when I was 23 and I couldn't remember. I'm just another year closer to 100, another year closer to retirement, another year closer to being a Mom, another year closer to dancing alongside my Saviour in Heaven. Great!
So what did I do on my birthday? Well, my amazing husband brought me up to the North Shore. We left Thursday night after work... so around 7. We had roughly a 4 hour drive to get up to our first campsite. We weren't even sure if we'd be camping because the weather was TERRIBLE and forecasted to be rainy, windy and cold all weekend. But, we decided to go anyways.
We finally got to our campsite around 11:30 and set up camp SO FAST and efficiently. I wish I would have videotaped it because we were flying! It was hard because the rain was drizzling down and we didn't want everything to be wet in the tent. And we succeeded! :) 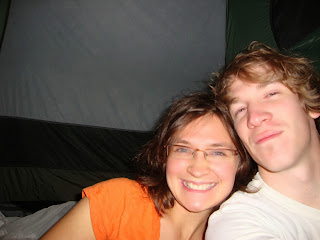 Don't we look great for driving all night after a long day of work and setting up a tent in the drizzling cold rain?! 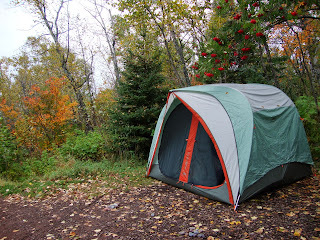 When we woke up the next morning, we realized that we had a super pretty campsite! It was RIGHT On the lake and we had these pretty red berry trees all around us. 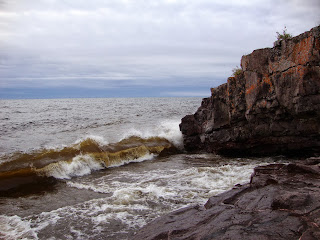 Here's the view we had from our campsite! SO BEAUTIFUL! this is Lake Superior! :) 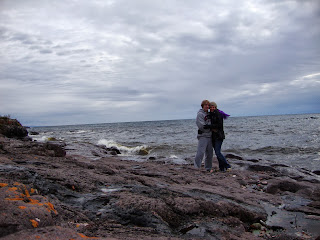 And yes - it was cold, but so worth it. I just wore long underwear, leggings, jeans, two pairs of socks, a tank top, a long sleeve shirt, a sweat shirt, a jacket, a scarf and a hat. 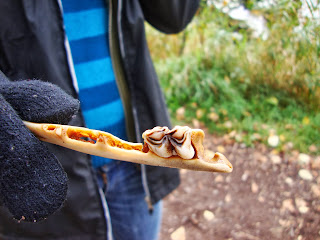 Oh!!!! and guess what we found?! This was SO fascinating to me! :) It was just this jaw bone - probably a baby deer or something like that. But it had two of its teeth still in the jaw bone. SO COOL! I brought it back with me home and I think I might make a necklace out of the teeth, or maybe just keep it together. Oh - its just SO COOL! 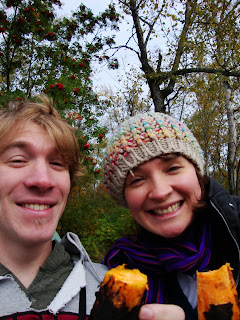 Mr. Barefoot also brought sweet potatoes and so we cooked them up PNG style. Basically, you just put the sweet potato skin and all right over the fire and let it turn black and start to crack, then you take it off and peel off the black part and oh my it is SO GOOD! :) 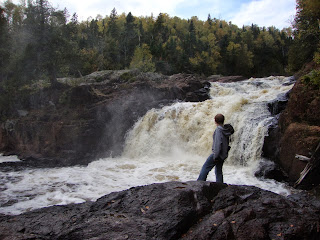 Then we did some hiking in the state park we were in. Here is my sexy Mr. Barefoot posing in front of the first waterfall we found. It was nice because there weren't many people on the trails since it was icky out, but since we were hiking we stayed pretty warm and I actually had to shed layers! 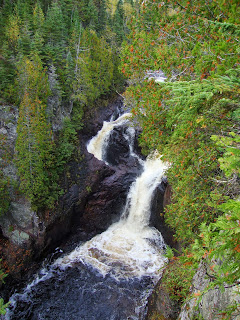 Then we did some more hiking up to the most amazing phenomenal outstanding mysterious waterfall I've ever seen in my life. This specific waterfall was called "Devil's Kettle." Now, let me stop on that note. I don't know why whenever people can't explain something, they just call it Devil's something. Why not when we can't explain something or understand it or its just so amazing we call it Lord's something. It just makes me so mad!
Anyways - this picture does NOT do it justice, so let me try to explain what you're looking at so you can understand how AMAZING this waterfall is. This is just a normal river and then you think its going to plummet down a cliff like a normal waterfall. Well - that's kind of what happens. The waterfall splits in half at the top of the cliff and half the waterfall falls down the cliff like normal (the right side) but the LEFT side splits off and falls down this HUGE hole in the cliff and just disappears. You can see the stream of water to the left side falling down and it doesn't keep going down the mountain - that's cuz its going into the earth. The cool thing is that all kinds of scientists have tried to figure out where the water ends up. They've dumped dyes, balls, and a number of other things in the gaping hole and looked all over for where the dye and other stuff pops out, but it never does. SO COOL! I feel like God made this waterfall just to show people that we really can't figure everything out cuz he's God and we're not. SO COOL!!! 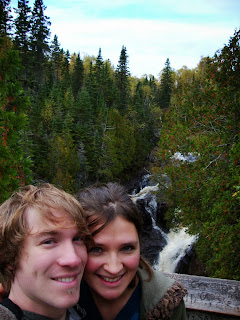 We tried to get a good picture of us in front of "The Lord's Kettle" where you could see us and the fantastic waterfall, but it really just wasn't gonna work. This was the best of about 15 photos that we took. 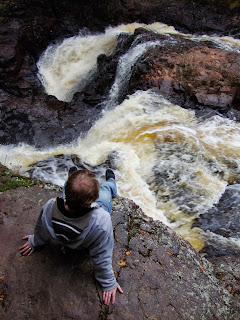 We kept on hiking up the waterfall and got to a point where we were right above the huge hole in the earth. Its harder to see if you haven't seen it in person, but the top of the picture is where the water is rushing into the hole. 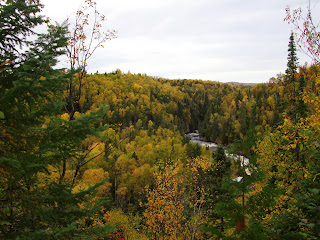 So then we hiked back up to our campsite and stopped at this amazing scenic overlook. SO PRETTY! Isn't God amazingly artistic?! :) 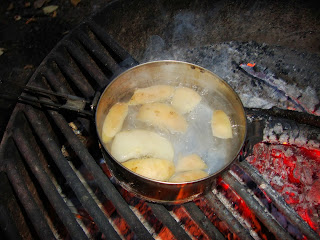 That evening was SUPER cold! By the way - by this time we had actually packed up our tent and moved to a new campsite. So since it was SO cold and rainy, I decided to make myself some tea. We forgot to bring tea. So i just cut up an apple and threw it in a pot of water and boiled it up. It wasn't amazing, but it was a hot slightly flavored drink. Perfect :) 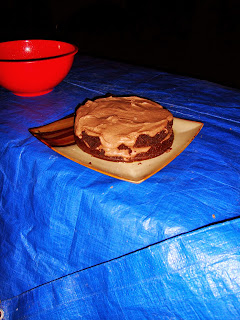 Now for the BEST PART! well - one of them. What you see before you is a made from scratch gluten free chocolate cake made with quinoa. AMAZING! And guess who made it?! NOT ME! My dear Mr. Barefoot made it for me, iced it, and transported it all the way up to our campsite and then served me up a huge slice. OH MY GOODNESS.... this cake is the best cake I've ever tasted. I am NOT exaggerating. Somehow as he was making the cake, he must have dumped some extra something in there to make it so delicious. Just so you realize the feat Mr. Barefoot conquered - usually cakes and breads of any type that are gluten free fall apart, especially if you need to transport them. Not only did this cake not fall apart, it tasted amazing and its a double layered cake with frosting in the middle! I could go on and on. 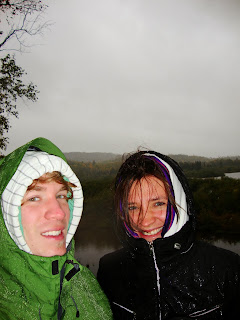 The next day there was one more waterfall we wanted to see. It was super rainy and SO cold, but we still decided to try to get there. So this is us right at the beginning of the hike. :) 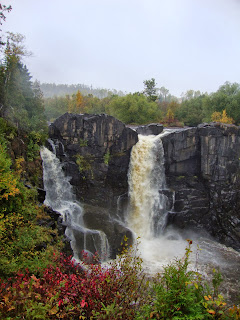 And here's what we hiked to! It was so worth it. This is the highest waterfall in Minnesota. We were about two miles from Canada. We actually had to turn around at the Canadian border because we forgot our passports and could not get through customs. This river is actually the border between Canada and the US. So actually we weren't even 2 miles from Canada. We were maybe 50 feet? i don't know. i'm really bad at guessing distances. 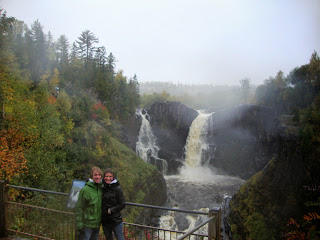 And here we are in front of the falls! :) That night, we were planning on camping, but we decided that it was just too cold and maybe even too dangerous to camp so we found a little hotel room with a fire place and really pretty view of the lake. 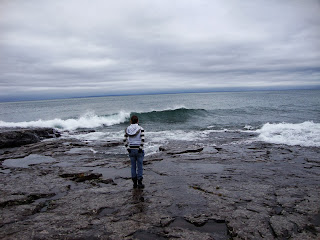 The next day (Sunday) we started back home but took a fun stop at the only working lighthouse in Minnesota. But first, we walked down by the lake and watched the huge waves. These weren't actually even the big ones. We saw ones that were about 8 feet tall - big enough for all the surfers to come out and get some action in! 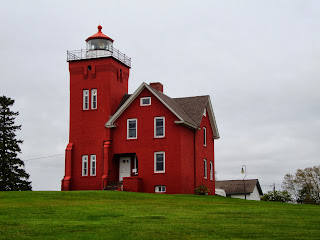 And here's the only active lighthouse in Minnesota!

So there's our trip for you to creep on. :) It was so much fun and a much needed get away for both Mr. Barefoot and I. It's been a busy and stressful couple months and we have a couple more before our next real vacation which I will reveal next blog.........