I had someone make a request to hear about one of the mysterious pictures I posted a few days ago. So even though I was planning on talking about it later, I'm going to talk about it NOW because it was requested! I love requests!!

This was the "mystery picture..." 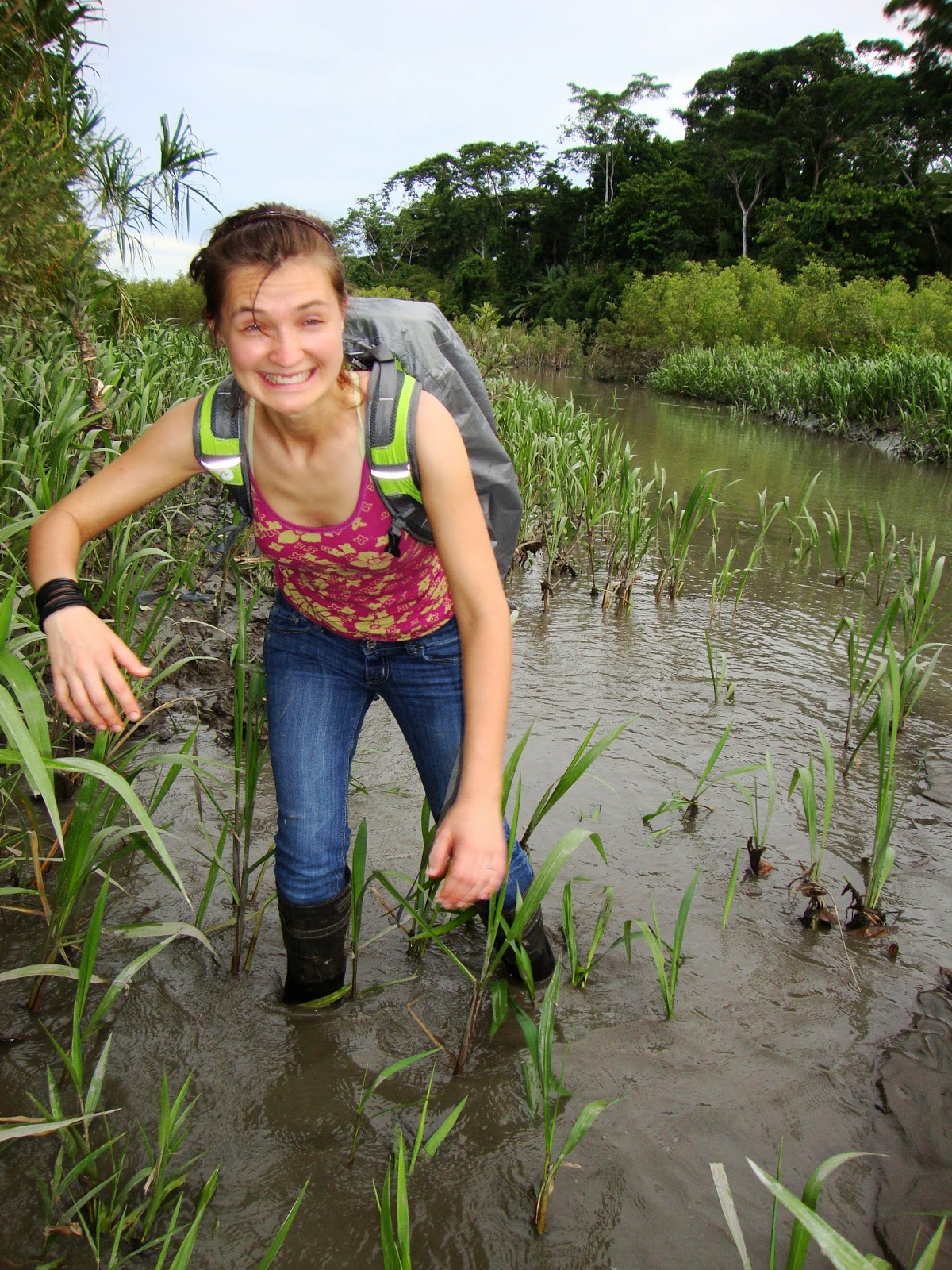 Haha, very flattering picture huh? Well - at the time I really didn't care! I was having such a hard time pulling my boots out of that suctioning mud. But more on that later!
Getting any ideas? I"ll give you another hint. The title of today's blog has to do with the picture above. Getting hotter? Here's another clue:
Dead Woman's Pass.
Stairs
Llamas
Monkeys
Boats
Getting hotter...?
Cuzco
Cathedrals
Have you guessed ...PERU yet?!

I'm FINALLY sharing about our trip to Peru a couple Christmas' ago! I can't believe that was TWO years ago. Things were SO DIFFERENT! I wasn't even pregnant, and although I really wanted to get pregnant I didn't think we'd be pregnant any time soon. Strange how life leads you huh... :)
We had just had a whirlwind holiday season so far - thanksgiving and then the day after we got on a plane and flew to Peru - BUT not before having a layover in TEEEXAAAAS where I got to see the LOVELY Sarah :) If you're curious about this Sarah person, look here.
Once we got together, had some yummy gluten free leftover thanksgiving meal, I went back to Mr. Barefoot and we flew the rest of the way to PERU! It was so exciting to be able to be going out of country again! We were most definitely ready :)
We had a layover in Lima, Peru. I don't remember how long it was, but it was in the middle of our night and not long enough to go out of the airport. We ended up just hanging out in our gate, sleeping and going a bit bonkers. 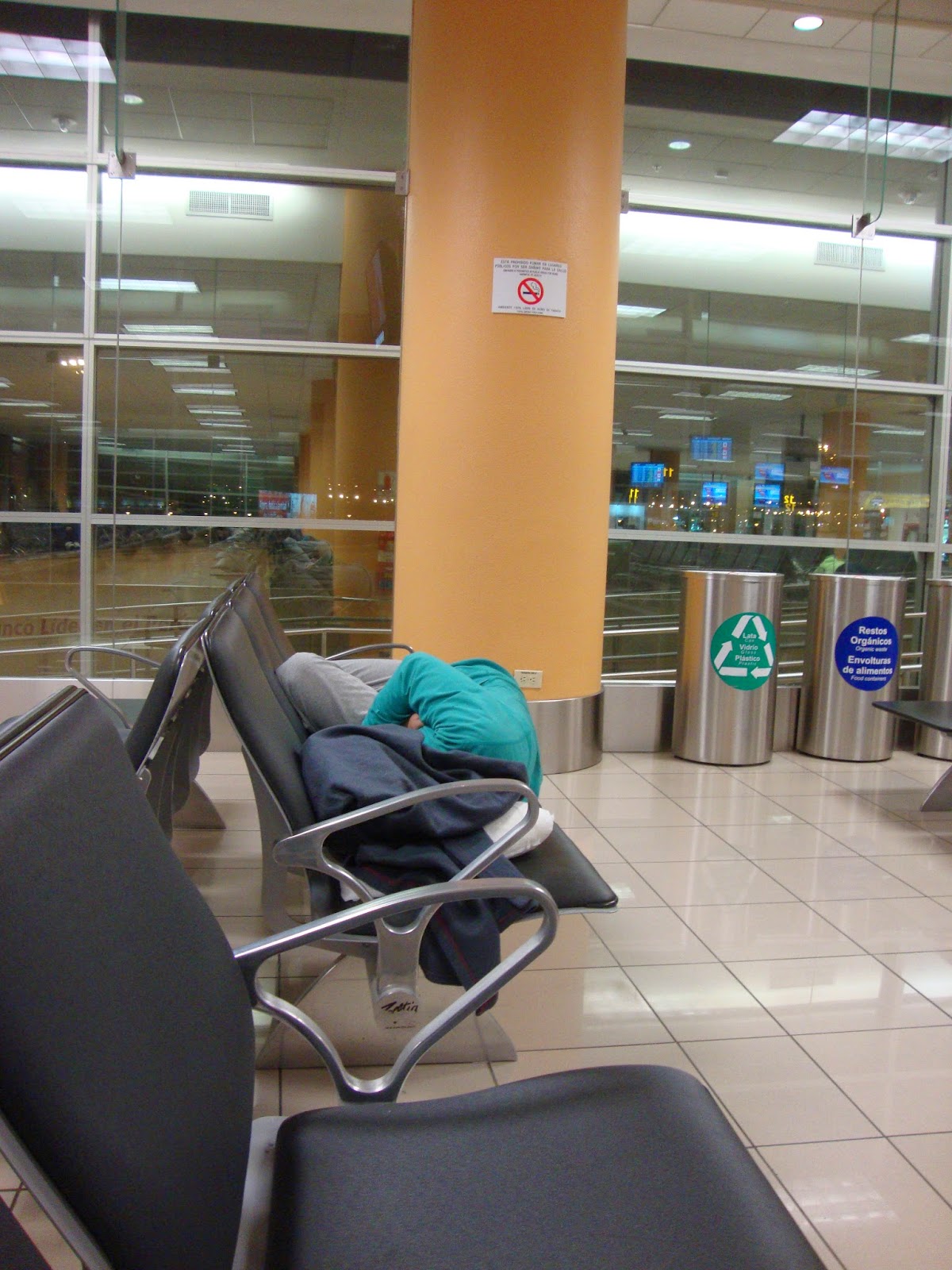 We took turns sleeping on the airport chairs. It was nice because the chairs were all strung together without arm rests so it was a bit more comfy to sleep - but not the most comfortable night we've ever had.


We finally got on our flight from Lima to Cusco! We were both so tired. I remember I slept most of the flight but Mr. Barefoot sat by the window and took pictures the whole time. He's such an explorer! :) I love it!

We got there and were a bit jet lagged. I can't remember how many hours different it is, but with our long overnight in the airport, we were pretty exhausted. First we walked around and looked for a "hostel," or a small motel type place where travelers could stay. We found one we really liked and put our stuff in the room and went out to look around a bit.

Both of us were pretty thirsty, and wonderfully there were "juice bars" all over the place! It was amazing! You'd walk into a store and see... 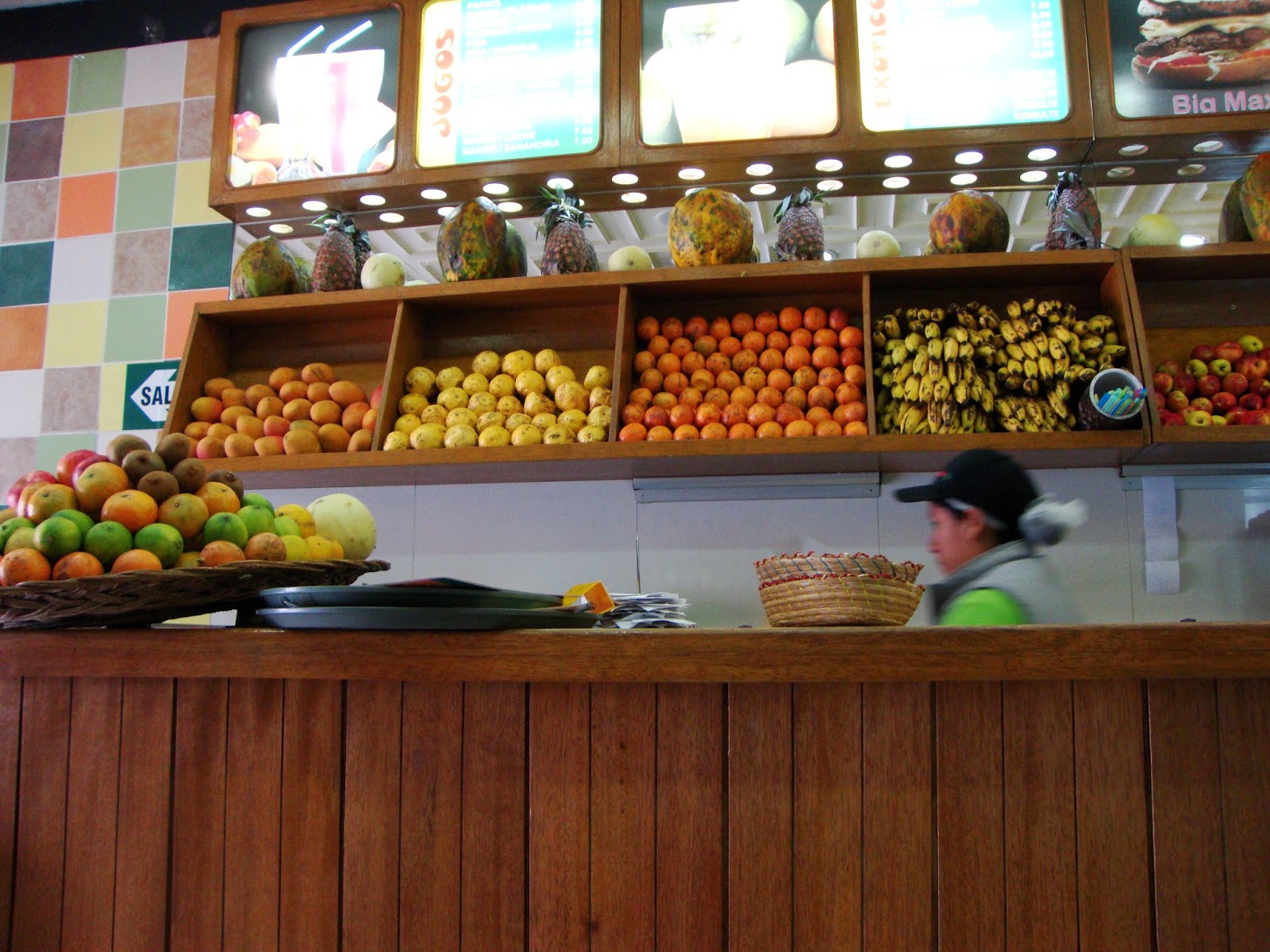 All delicious fresh fruit! And you'd just tell them what fruit you wanted, and they'd get the fruit down, peel it, cut it and throw it in the blender and walaah...


DELICIOUS FRESH FRUIT JUICE/SMOOTHIE! It was so refreshing! :)

After our pick me up, we walked around the Plaza del Armas (or the main open area in downtown-ish Cuzco) and got our bearings. There was some type of parade going on - we weren't sure what it was, but after we had come back to the States, we thought it might be the Fiesta del la Purisima Concepcion (or the Festival of the Immaculate Conception.) It was really funny because people were dressed up as all kinds of things - everything from smurfs to Santas to traditional Peruvian wear. 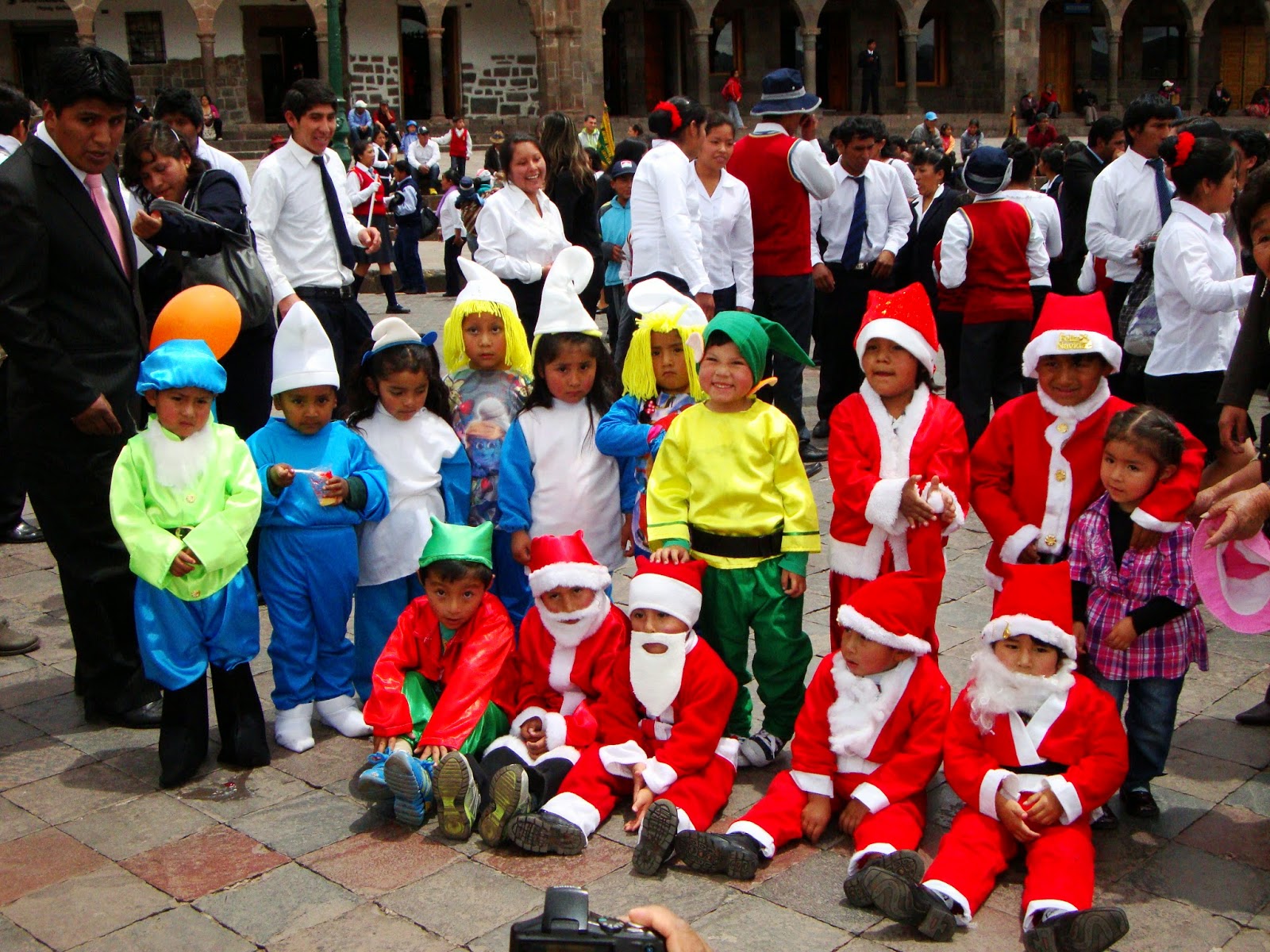 The kids were so cute! And all the leaders or whoever was in charge of the kids would have them all line up so tourists could take pictures. Yes - we were tourists and we acted like it. 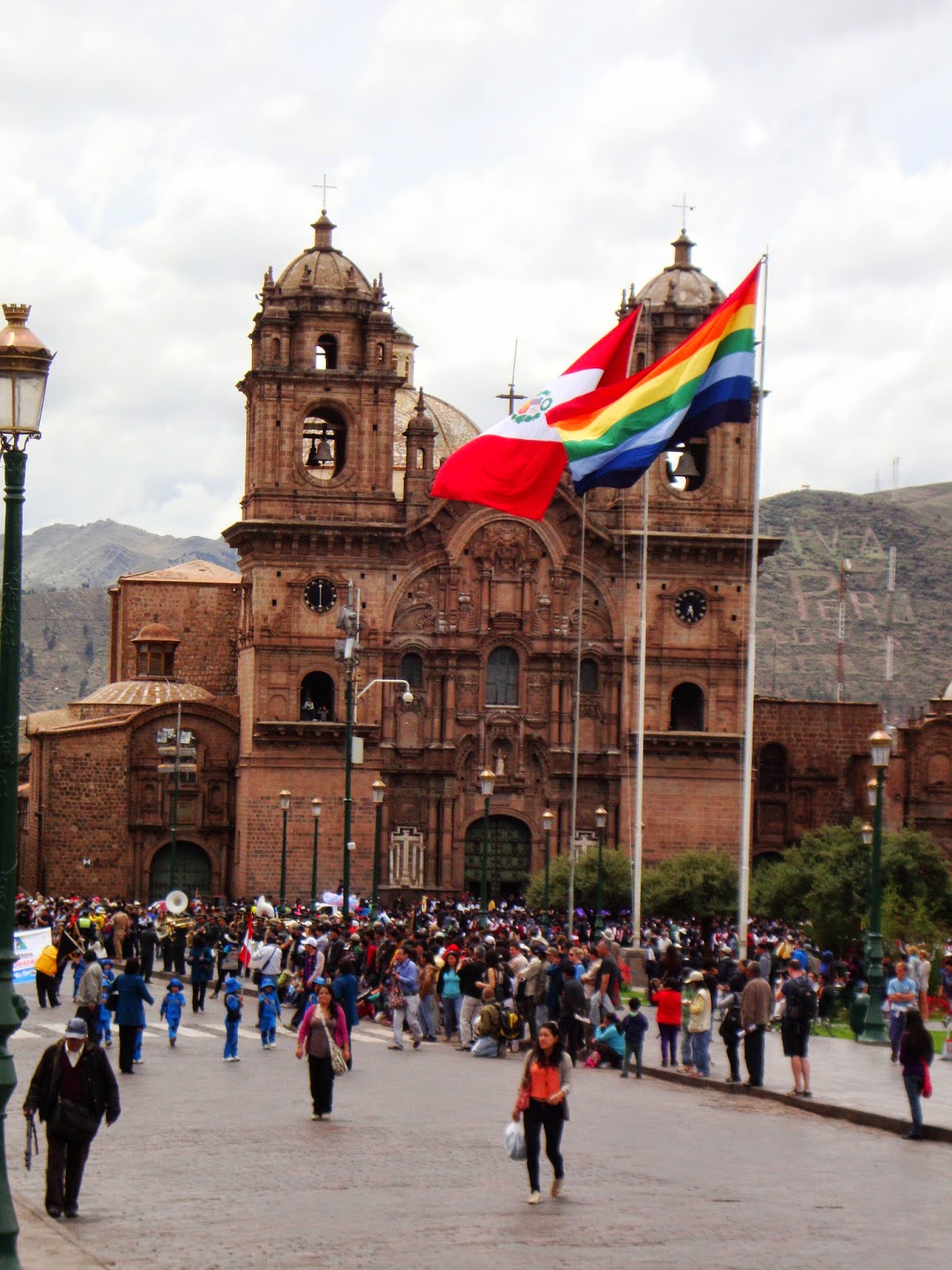 In addition to the many ruins (which I'll talk about lots more later) there were lots of cathedrals. The cathedral above is one right in the Plaza del Armas where the parade was going on. Catholicism is very strong in the area. We were able to visit many of the cathedrals and even see some tours.
Unfortunately, there were "no pictures allowed" signs everywhere. But, they were absolutely beautiful and amazing inside. Many beautiful paintings, amazing sculptures, stained glass windows and much of the walls/artifacts were lined in gold. Breath-taking!

Cuzco was a crowded little town that was built on the side of a mountain. We'd leave our hostel and walk down to the Plaza del Armas to look around, catch a taxi, get directions, etc and if we wanted to get back to our room or go see some of the places at the top of the mountain, we had a bit of a hike! Walking up to our room definitely got our hearts pumping! 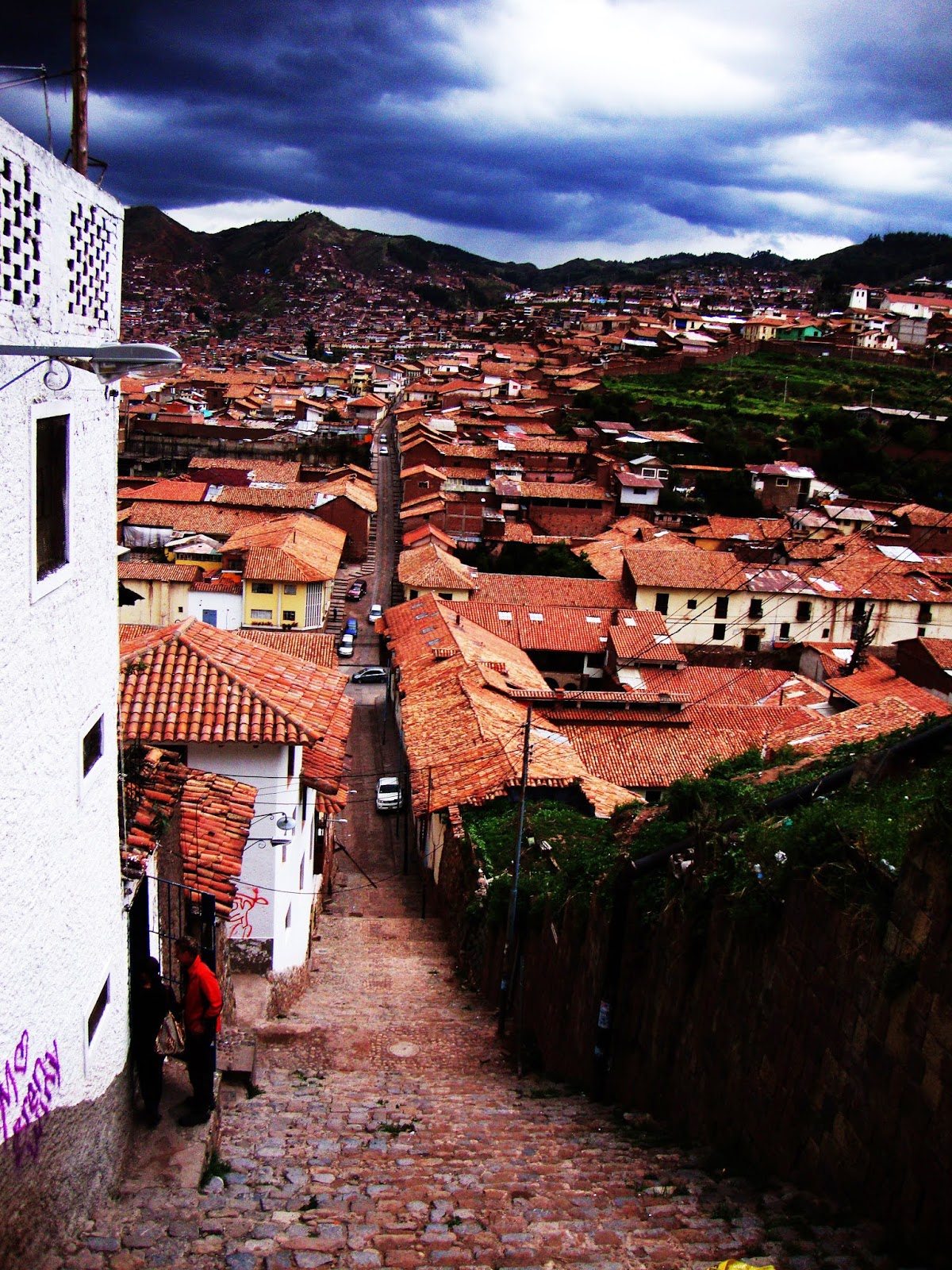 We decided to partake in one of the "delicacies" of Peru - have a guinea pig! They cook the thing whole - like brains, stomach, bones etc. THE WHOLE THING. They brought out this lovely plate of food and did we eat it?
Oh yes, we did. Was it delicious and would we eat it again? Um... well, let me say it this way. It was definitely a new experience and I definitely don't regret trying it, but I wouldn't order another one... :) 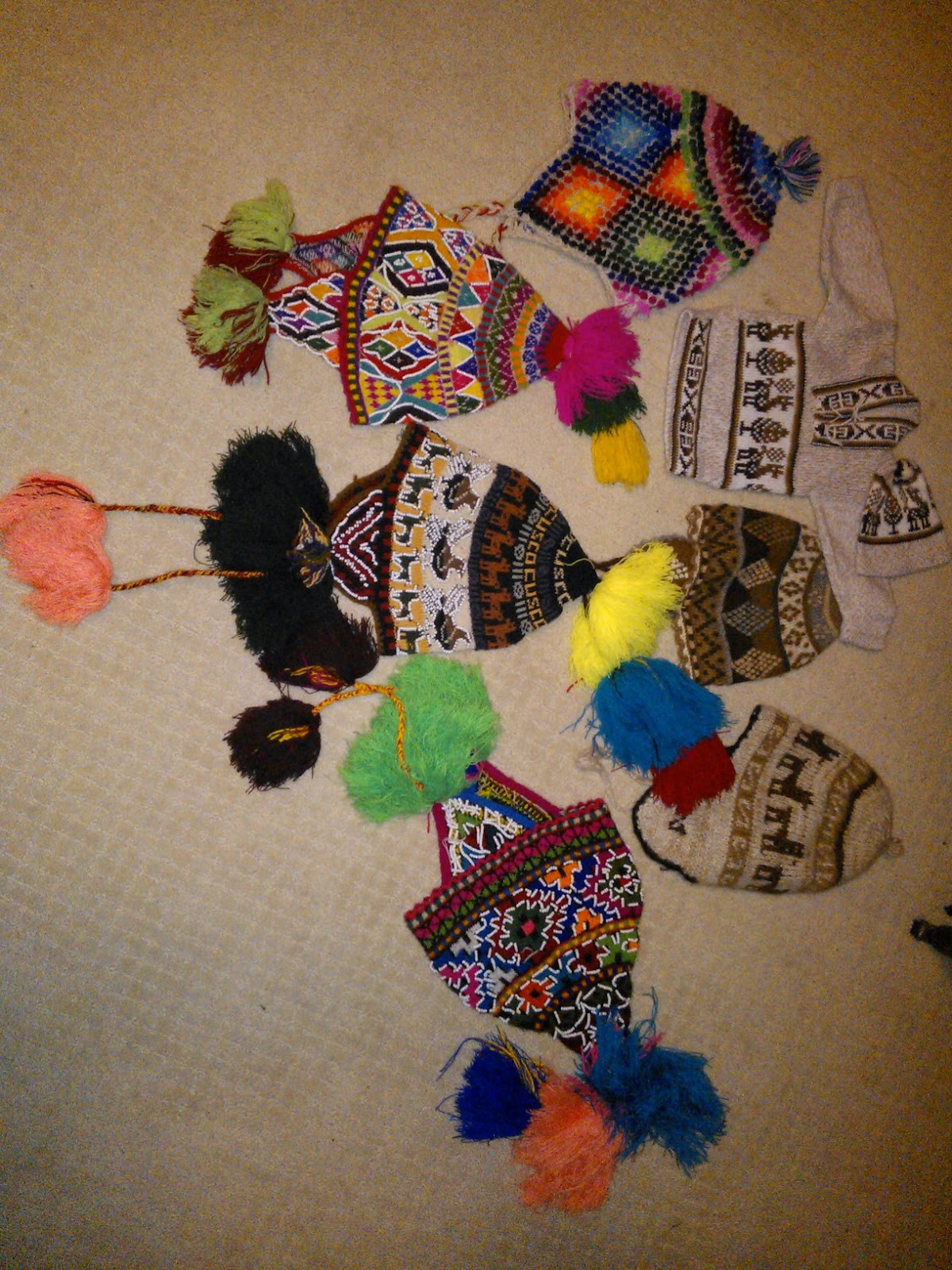 We were also able to buy some fun looking hats for ourselves and also to give to wantoks (friends) back in the US. Mr. Barefoot's hat that he kept for himself is still his favorite, most warm hat. Thanks Peru! If I remember correctly, all of the hats we bought were HAND MADE - these people are AMAZING! 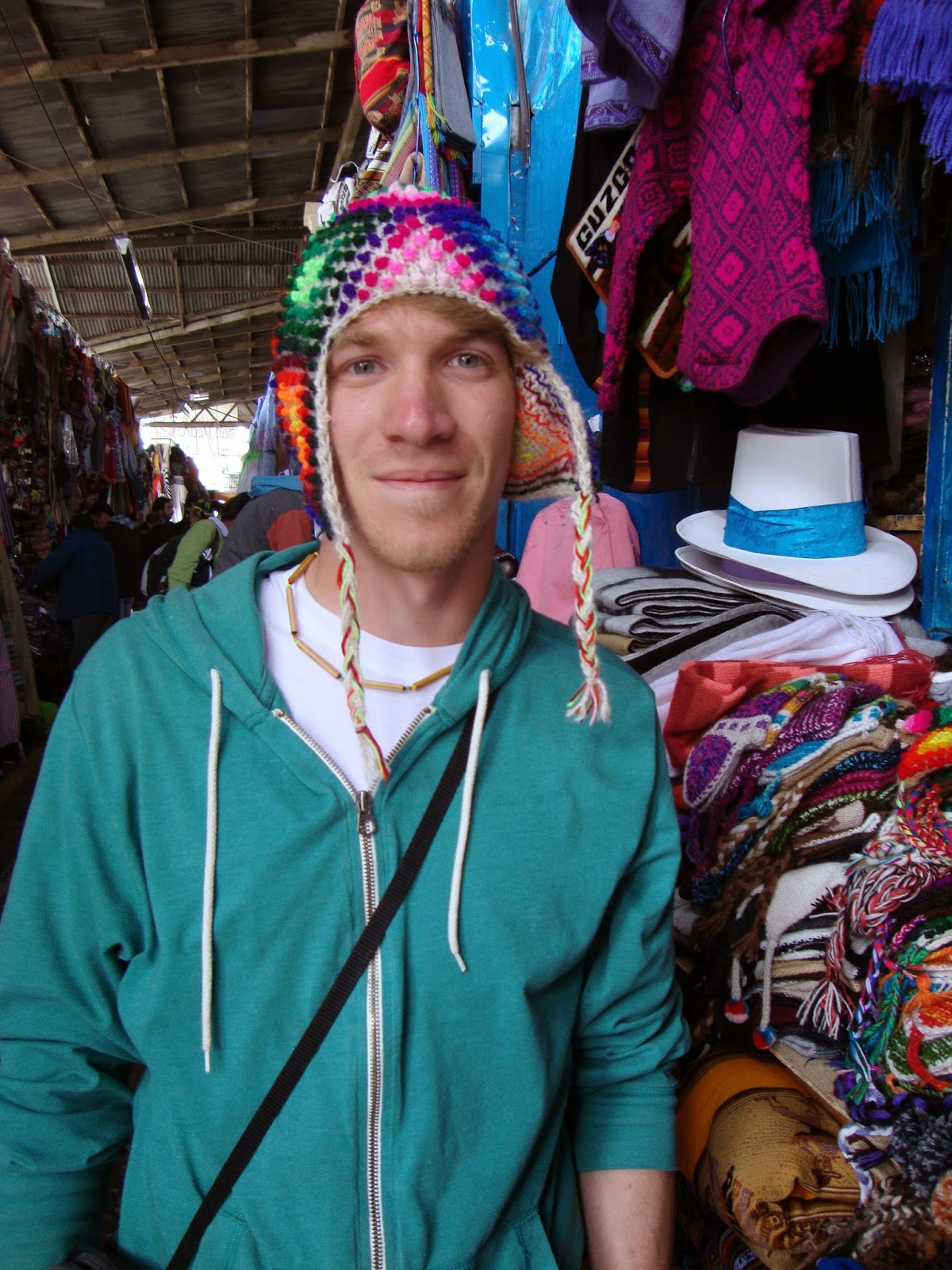 Here is my handsome husband modeling a lovely hat :) 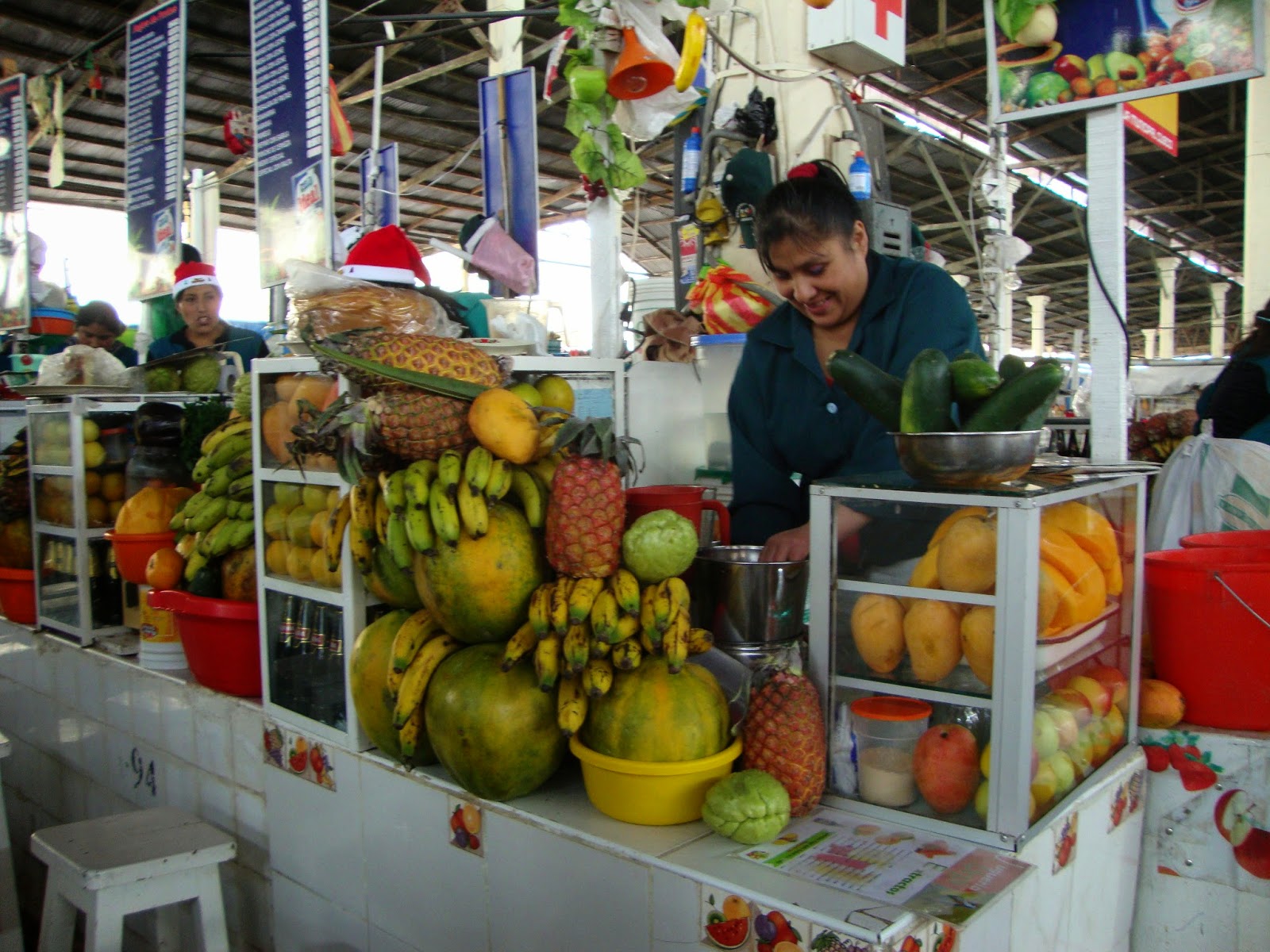 While we were hat shopping, we HAD to stop at another juice bar for a refreshing boost! :)

There were some ruins we were able to see in and around Cusco. One of them was Saqsaywaman - which we always pronounced as "Sexy Woman" because that's kind of what it sounds like! Technically I think its more like Sahk-Sah-Wah-Mahn... but Sexy Woman is so much more fun. Cuz you can say things like... 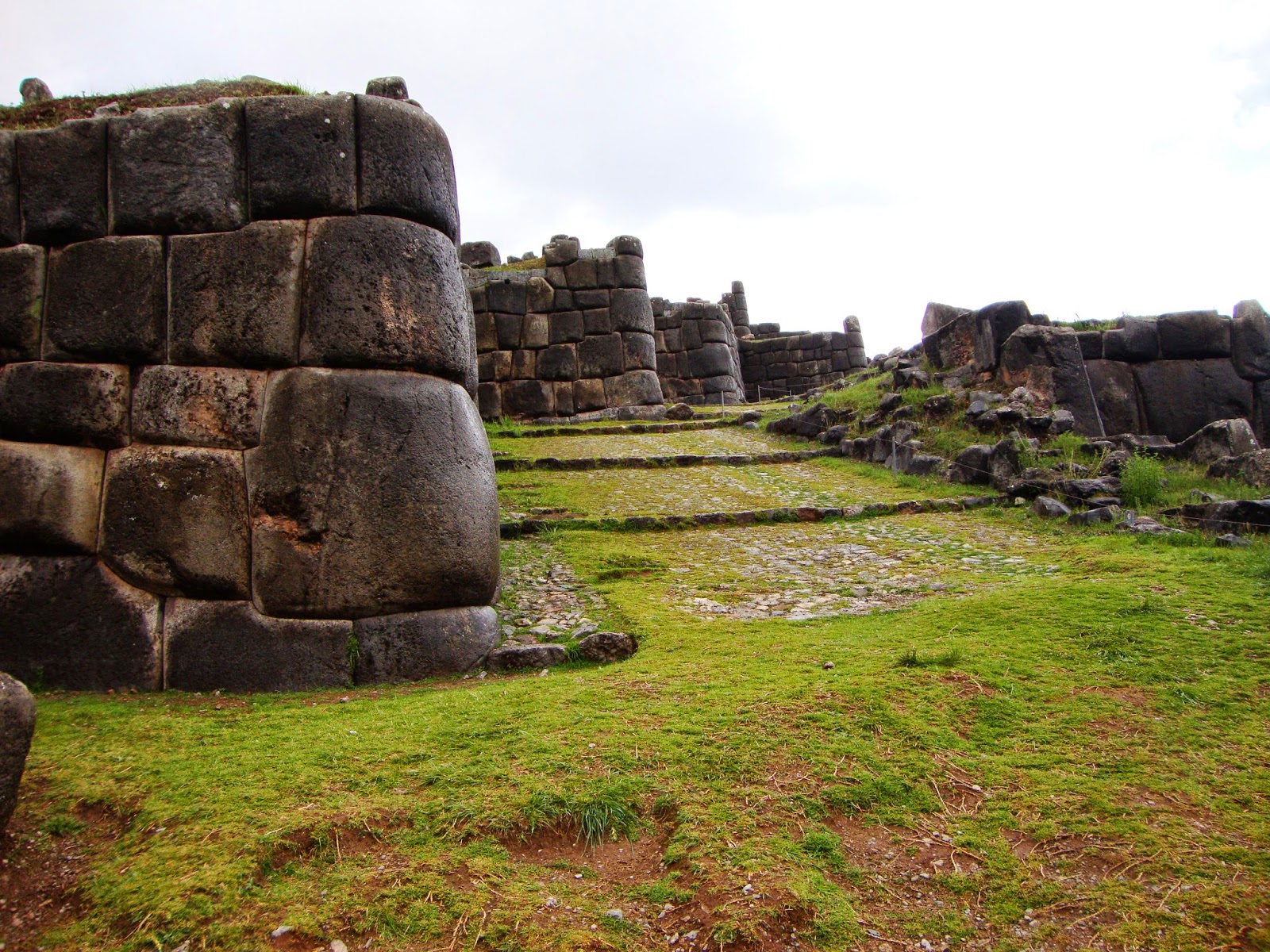 The amazing thing about Saqsaywaman was how HUGE the stones were - like each individual stone.  Keep in mind the Incas didn't have the type of equipment we have these days, but the work they did was AMAZING! That was even more evident when we saw Machu Piccu - but that's another story for a different day :)

To give you a bit of an idea of how massive these stones are... there is my sexy husband standing next to one of Sexy Woman's stones. Absolutely MASSIVE! 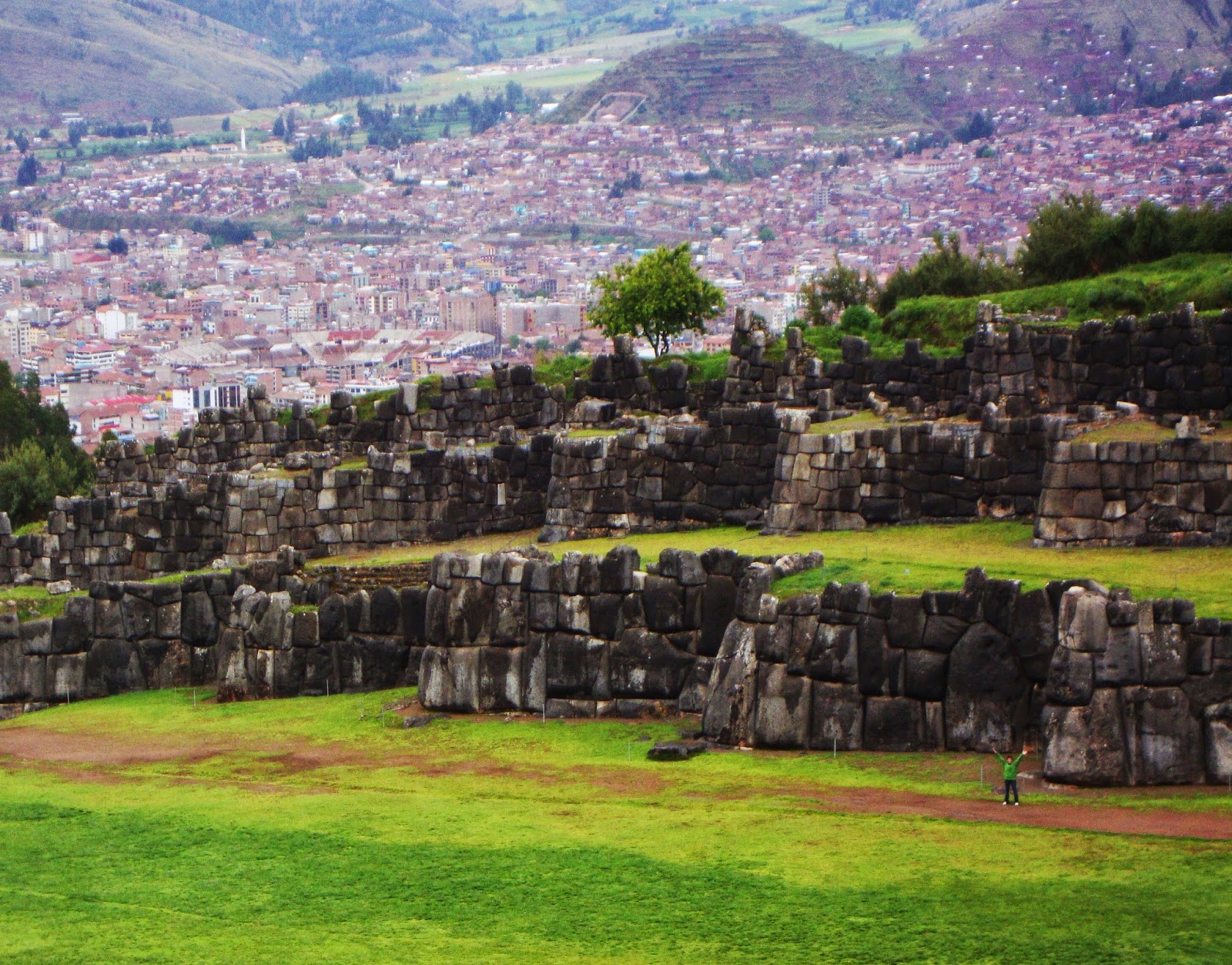 Like I said, not only was the size of each stone amazing, the size of the whole ruin was breath-taking as well. This was just one side of the ruin - there was a whole other side across the small grassy flat land. If you look carefully, you can see a little green something standing on the right side of the picture.... hold on. There - inside that little red circle is me!! Michael was standing on the top of the ruins on the other side of the little flat grassy middle area. 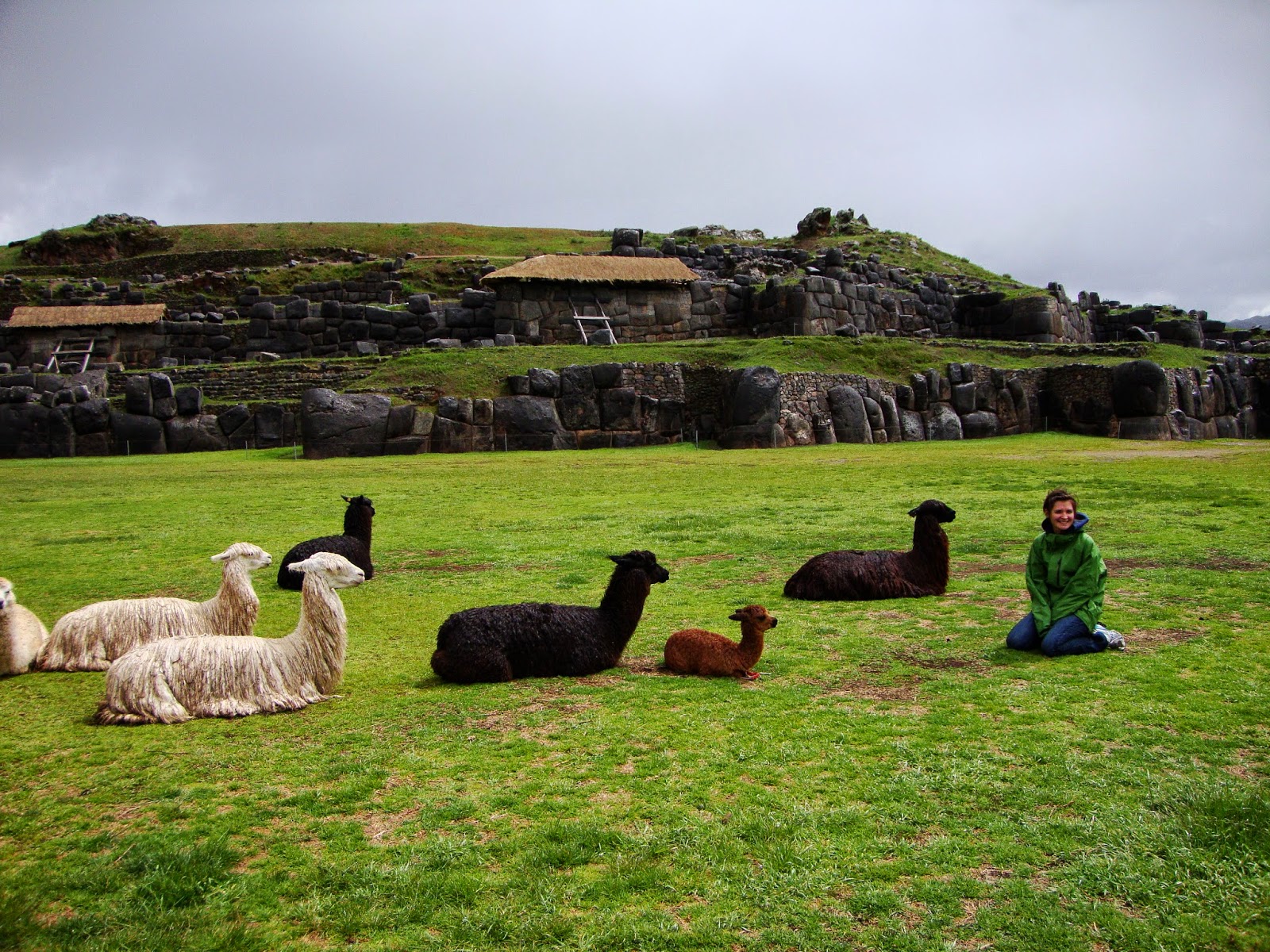 I keep talking about the middle grassy flat area? Well - there it is. Llamas made it their home, and I decided to join them. I always have this desire to get as close to wild life as I can - like the time I pet a wild deer or the wild stingray buried in the sand.. but that's another story! 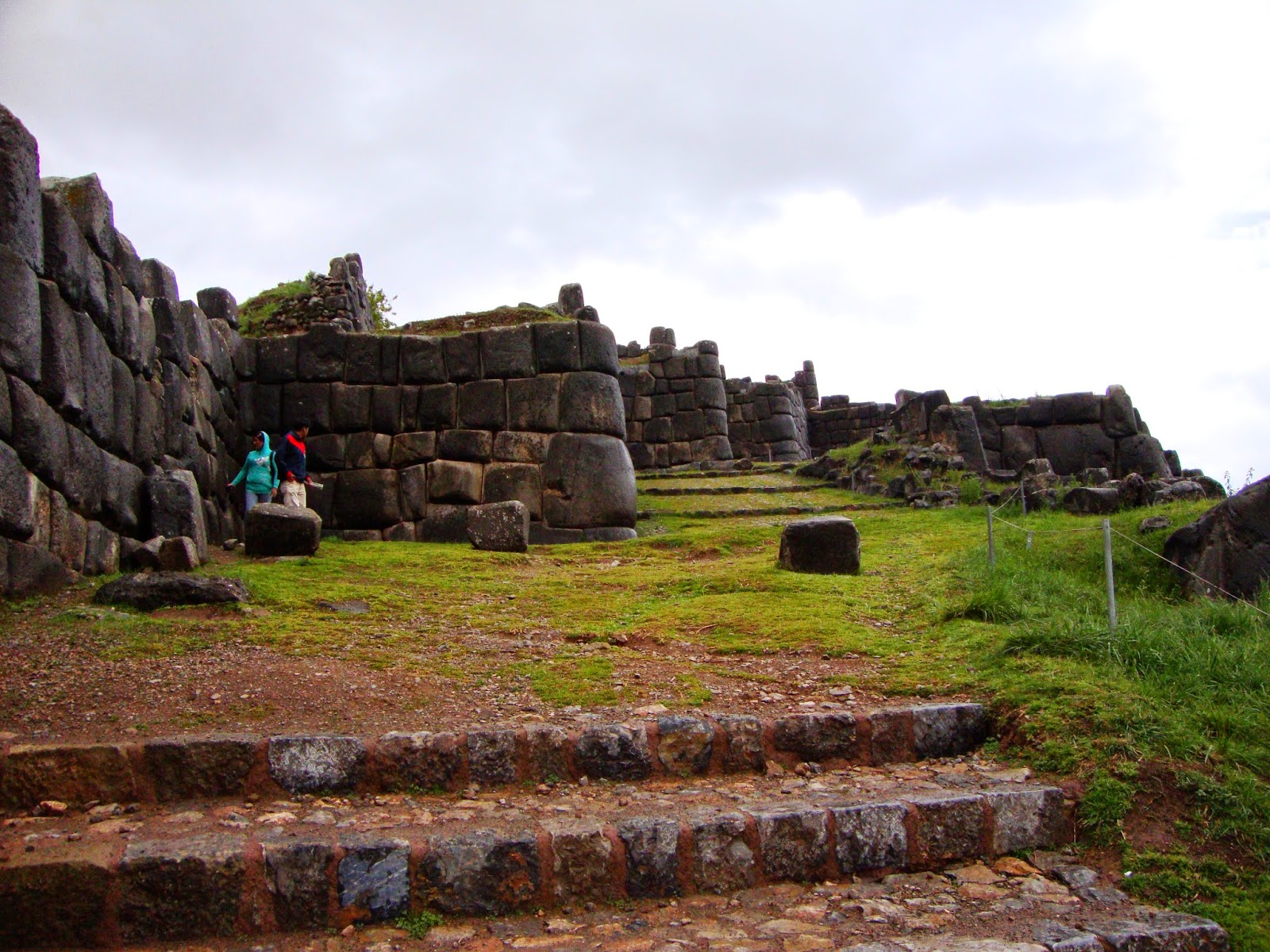 Then we walked around a bit inside the ruins - just amazing! Its mind boggling to think about how the Incas put all these huge stones on top of each other and they are still standing so strong and tall today - but really, this was nothing compared to the grand Machu Piccu....

We also went and saw "Tambamochay." This was what they think where the Incas did their ritual bathing to cleanse themselves. We could easily see where the different bathing "stalls" were. 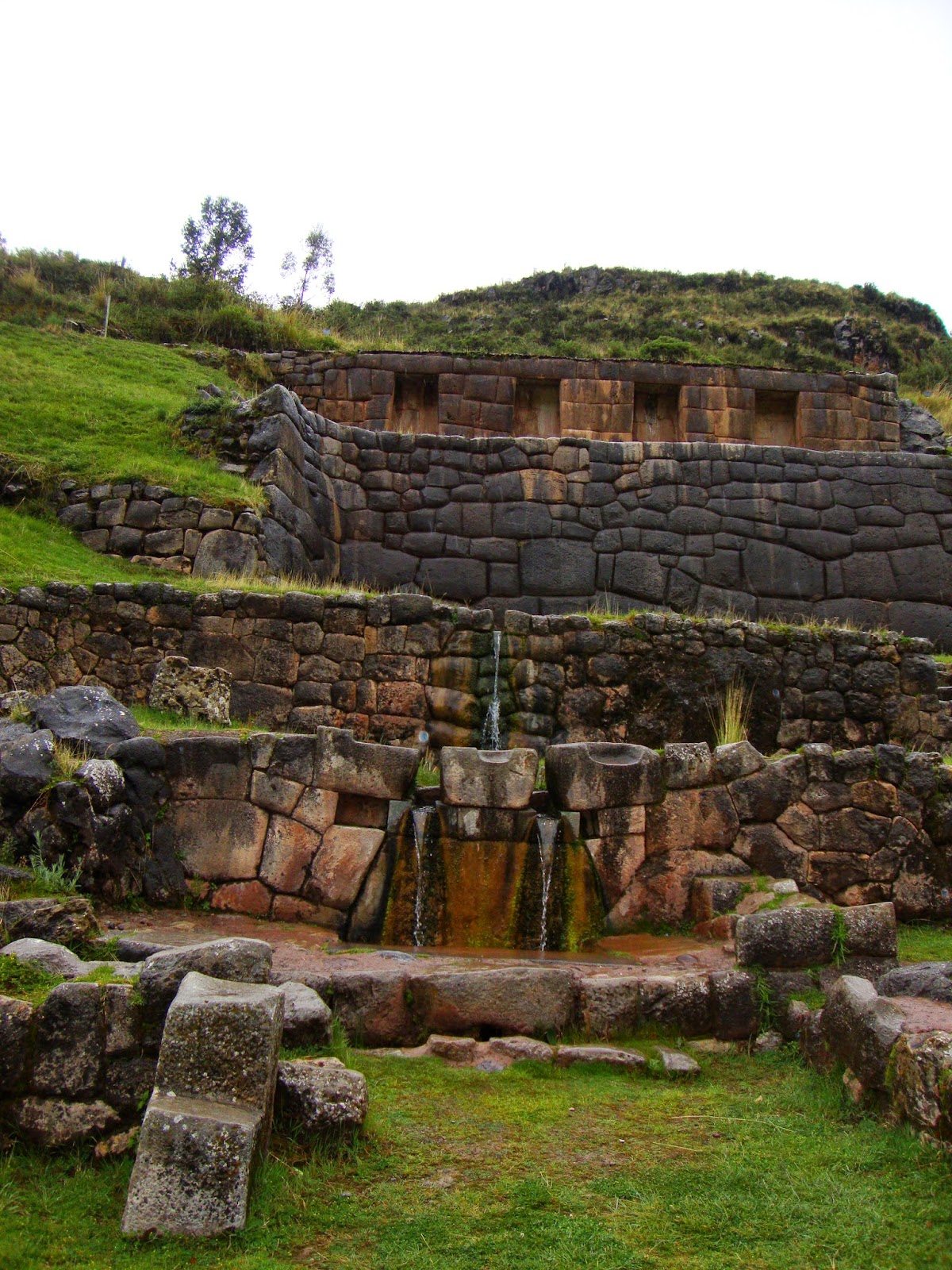 You can't really even look at these pictures and say that the Incas weren't amazing! It was even more amazing in person. 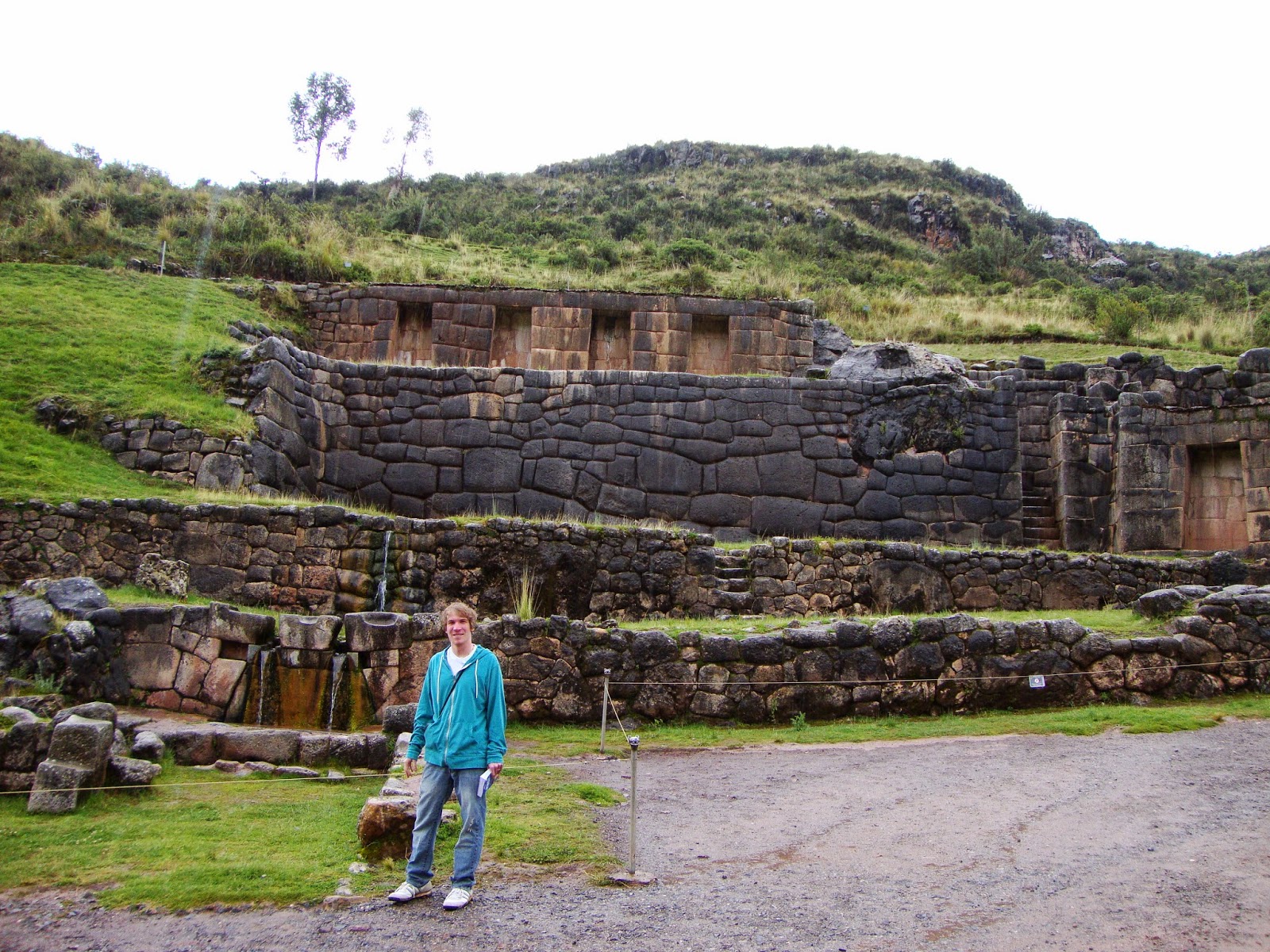 And of course, my handsome husband documenting that yes, we WERE at Tambamochay.

Then, we walked home from there - it was about half an hour or so? maybe 45 minutes. Yes, it was a long walk and we were both tired afterwards, but it was so much fun! :) 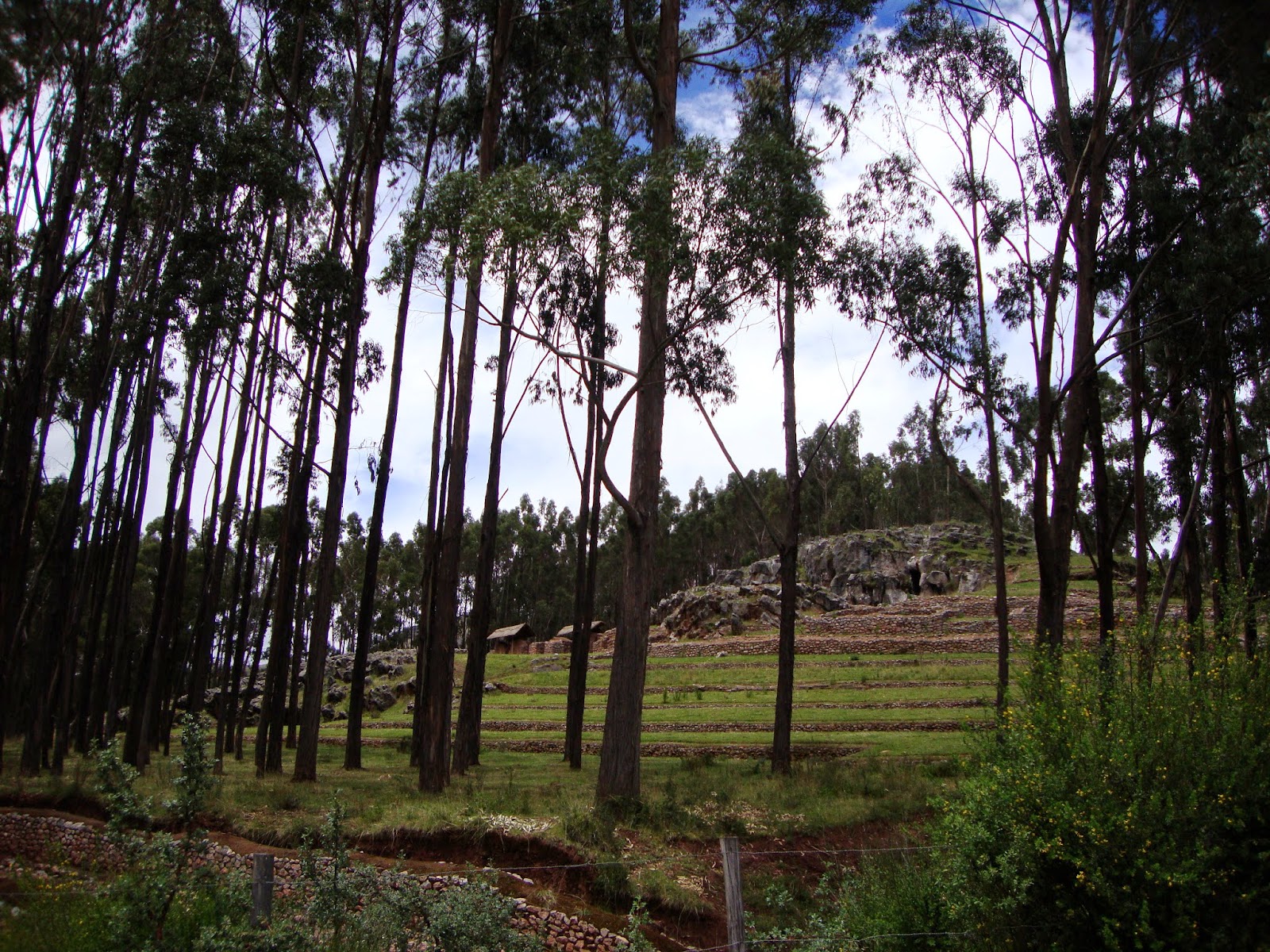 Even when we were walking home, almost everywhere you looked, you could see ruins. The Incas were an amazing, vast, and powerful civilization. 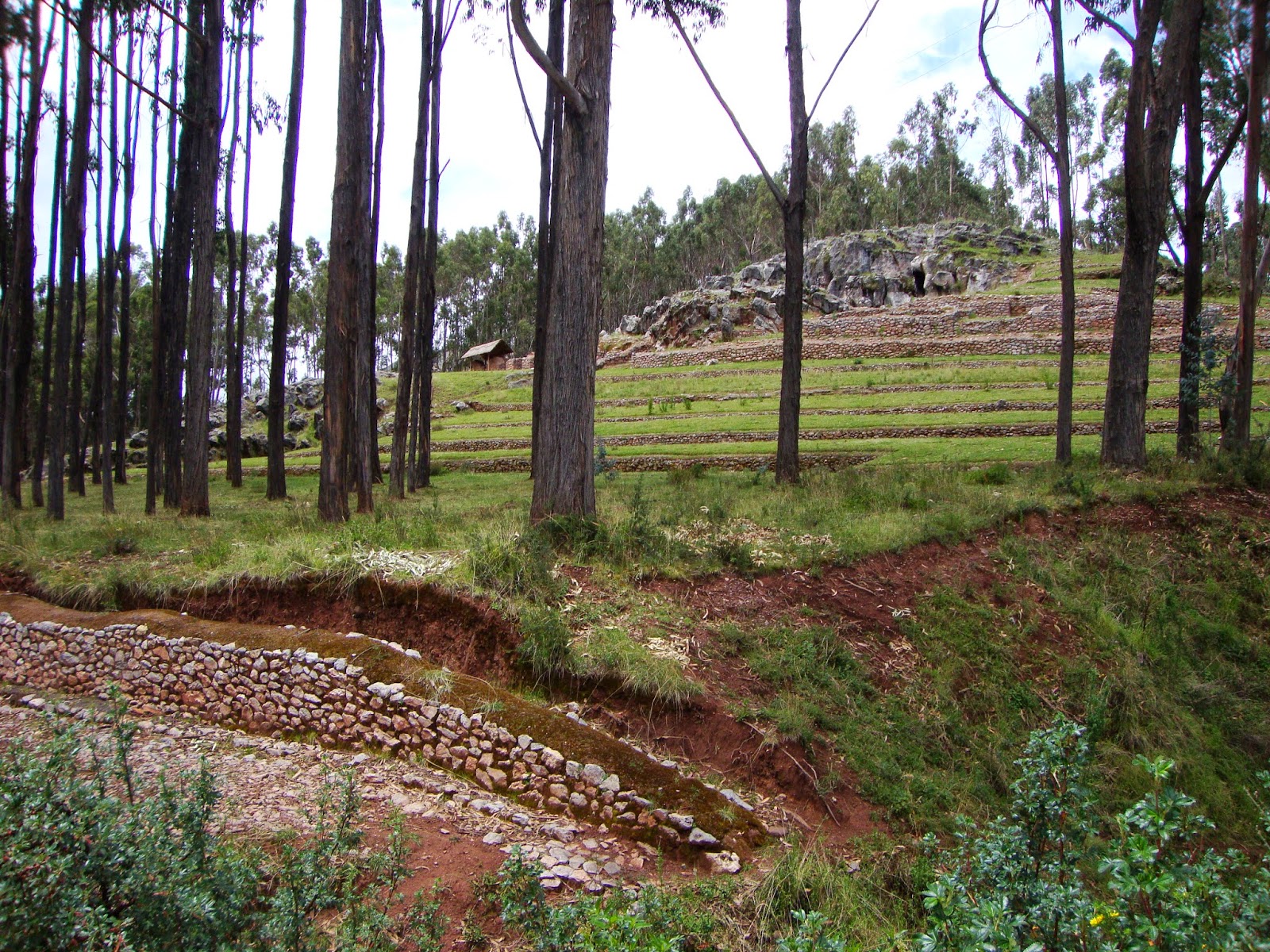 We knew we were getting close to home when we saw "Jesus." He was on top of the mountain looking down over the city of Cuzco. At night they'd shine a light on him and he looked like he was glowing. It was a good reminder that even in foreign countries, Jesus is still constantly watching over his children. 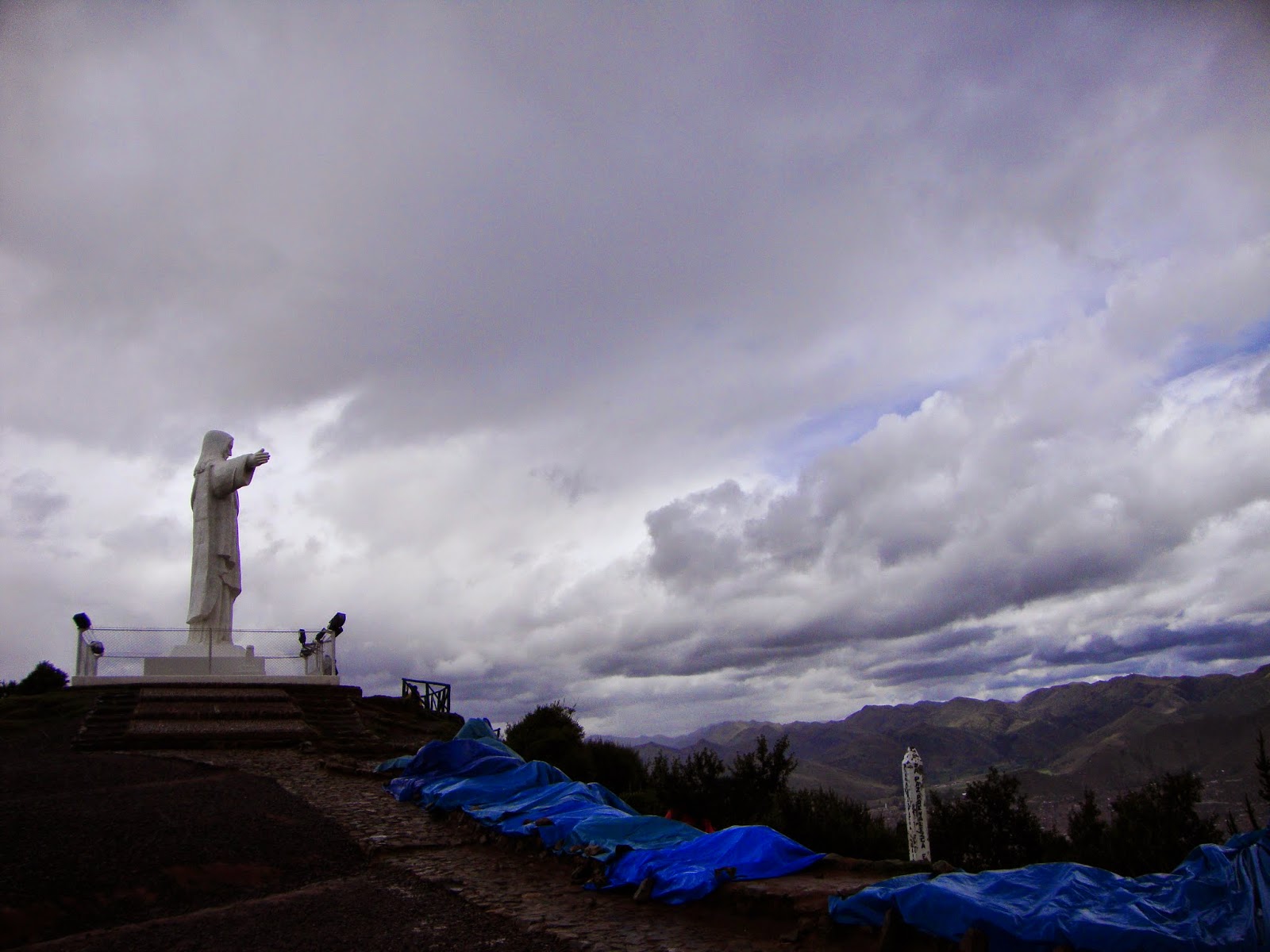