I decided to follow a very purist version of Trim Healthy Mama.  If you haven't heard of it, the idea is basically to separate your "fuels." So when you eat fats,  you don't eat carbs, and when you eat carbs you don't eat fats. It's more complicated than that,  but that's the main idea for the "weight loss plan." Each meal is anchored with protein and what they call fuel pulls which have neither fats or carbs (think fruits or veggies). And then they say no sugar.

I'm not following the weight loss plan completely as I'm breastfeeding two kids (one via the source and one with pumping) but rather a gentle slow weight loss but really more focused on nourishing my body.  So,  all that means is I won't always be separating my fuels,  I will eat carbs and fats together sometimes. When you do that, it's called a crossover.

Although getting my body a bit less floppy is on my list,  it's not a priority right now. Having four babies in four years, having bad HG (where you puke all the time during pregnancy), having post partum depression and anxiety, being a mom, having nearly a nonexistent microbiome  (I'll write more about that later, but I think it's getting better slowly) etc are all reasons I'm choosing to eat THM. it's a very healing way of eating,  and I want to rebuild my body.  It's another form of self care.

By saying I'm following a very purist THM plan,  I mean that I'm doing lots of soaking, fermenting,  sprouting of my grains, nuts,  beans etc to make them more nutrient dense and healthy for me.  I'm making my own foods rather than buying "frankenfoods" as THM calls them.  Frankenfoods are Basically store bought foods that follow the THM Plan. My microbiome issue kind of keeps me from buying premade foods already, mainly grains,  but I can do a few without major issues.

I haven't decided exactly what I'll be doing as far as sugar.  Technically the only on plan "sugars" are stevia, xylitol and erythritol. Im much more inclined to use honey, maple syrup and sucanat in limited quantities but as I said I haven't for sure decided.  I don't think sugar in itself is bad,  especially when it's raw unrefined sources like I mentioned.  It's just important to remember to use it sparingly versus in every meal,  snack and bite to eat.

To prepare for this week,  I am doing a number of things.

Firstly, i made my no knead bread.  You mix all your ingredients,  and let it rise, then into the fridge to take pieces off as you need them.  So it's basically a long cold fermentation vs a quicker fermentation from a sourdough starter or wild yeast starter, or soaking the flour etc.
Basically,  if you're new to the idea of soaking grains it has to do with making the grains more digestable by your body.

I used a blend of hard white,  hard red wheat and rye berries to make my flour.  I used honey and molasses as my food for the yeast and soured raw milk as the liquid.

I absolutely love grinding my own grain. It definitely takes time, patience, and lots of tweaks to figure out but So worth it! I love knowing exactly what's going into my food,  right down to the flour amounts! 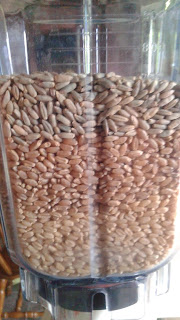 The grains here are hard white on the bottom,  hard red in the middle and rye on top.  Beautiful rainbow grains :)

I don't have a "proper" grain mill, but I do have a vitamix. And although I've never owned a grain mill,  I'd venture to say my "kitchen angel" aka the vitamix, is better as it does soooo much more.  You'll probably get sick of hearing me talk about it,  but it seriously is THAT amazing.

So into my Kitchen Angel go my grains and out comes lovely fresh flour. And the result is a lovely dough to begin fermentating.
Just so you know, if you didn't notice already,  I dont Really care about taking fancy pictures.  I have better things to spend my time doing. 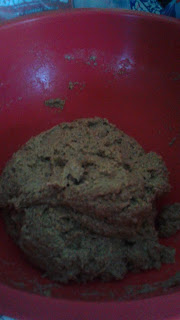 I know my dough looks like a pile of poop.  It's not, really. It's just that my phone battery was down to 6%. The camera quits working at 5%. And the flash to my camera quits working at 15%. So I had 1% of battery left to take a picture with no flash in my dark messy kitchen,  so I did.  I'm a mom blogging about food, not a food blogger.  Whatevs.

The dough is super wet, which is really important with fresh ground grain especially when it's going to soak/ferment for a longer period. Reason is that fresh flour soaks up sooooo much liquid. Kind of like coconut flour if you've every baked with that.   if you have ever cooked with coconut flour and always wondered why there were so many eggs in the recipe, it's because Coconut flour needs a ridiculous amount of liquid as it soaks so much up. Very similar to freshly ground wheat. 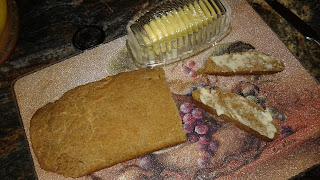 No kneading. Just a little mix. In the bowl to rise for three hrs, then in the fridge to slow fermentat at least 12 hours and up to 5 days.  Result is delicious,  home made healthy whole grain without any nutrient blockers  (what soaking/fermenting does) bread. Actually multiple loaves of bread.  Yum. 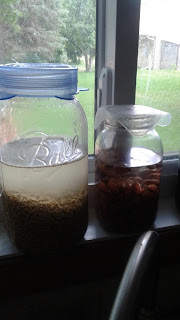 I also am soaking my almonds (in the smaller mason jar, and yes still 6% battery so no flash). Yet again,  another way to get rid of the nutrient blockers.  When Mister Barefoot saw me soaking them,  he asked "are you sprouting them?" I LOVE that he knows about sprouting  (because I've sprouted grains before) and that its a totally normal question.

It soaked all night,  and then i strained the water from the almonds, added more fresh water and made almond milk for my high carb low fat meals where I can't have heavy cream. 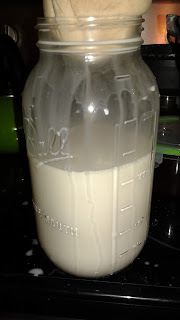 So easy to make almond milk.  Just took the soaked almonds and put them into the vitamix with double the amount of water to almonds.  Then blend away and strain. I use these great multipurpose all cotton bags I got from amazon to strain. 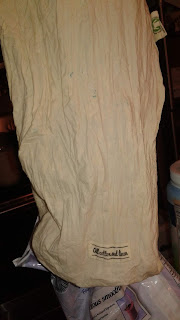 Then squeeze out all the extra milk.  And Em Nau, home made almond milk! 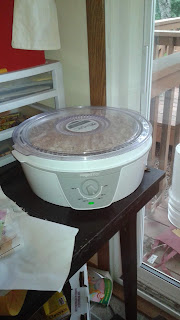 A plus to making your own almond milk is you can dehydrate the pulp and get almond meal! Don't let anything go to waste! 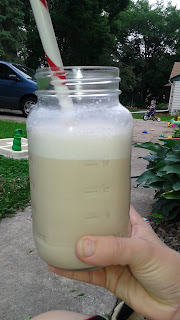 What's the first thing I made with my almond milk?  Iced cold brew coffee of course! I use a different all cotton bag to make my own cold brew (coffee beans ground in the vitamix, then in the bag and in the jar with water, and into my fridge to make coffee!). 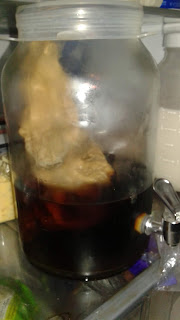 I used the milk, coffee, honey and collagen.  Blend it up in the vitamix and you get a delicious no junk iced coffee! ♡

Lastly,  I also am soaking some oat groats, Again to get rid of the nutritient blockers.  But with grains I need some type of acidic medium.  With the bread I used sour milk. With the oats, I used apple cider vinegar WITH the mama. Cuz the mama gets things duuuuun! ;) the ACV helps break down the nutrient blockers. I've read opposing things about if you NEED the acidic component to successfully do that,  but I've decided to just go with it because why not.  Technically I'm supposed to let the oats ferment for at least 24 hours,  but I think these will go about 12. I need my oats for breakfast! 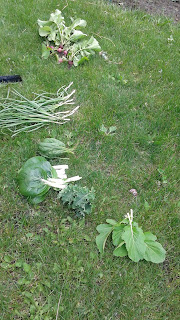 In other news,  mister barefoot brought the farmers market to me,  for free.  Radishes,  kale, spinach,  lettuce,  bok choy and green onions. Aren't they beatiful? He's so talented! I'm very excited to be getting produce again from our garden.  I ate about five handfuls of straight lettuce today,  just so scrumptious! 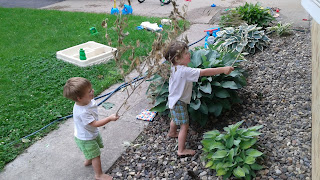 Also, raising boys. It's interesting.
If a boy finds a stick, then he'll probably hit something. In this case the house. And his brother. And the plants.  And other sticks. And the sidewalk. And EVERYTHING. All while making boy grunt sounds and roars and grinning his head off.

And if a boy finds a doll he might co sleep with it, stroke it's head, cuddle with it and sing it to sleep AAAAND melt your mama heart with his sweetness.

all within ten minutes.

And then ... the Conversation between Twinkles and Gymnast while playing with said dolls...
"It's a penis!" Yells Twinkles exuberantly.
"No,  Twinkles, that's a belly button!" Replies realist Gymnast.