This morning's breakfast conversation was a perfect example of the chatter my children have MULTIPLE times a day that I love just being a silent observer for, until one of them asks me for my own thoughts or I feel for their own knowledge or others sanity, I step in.
I just pulled out a new box of clothes for Oragutan who still fits in 2T, even 18 months. (she's a shrimp with one grandma at 4 ft 11 and the other at 4 ft 1) Even though she CAN fit in smaller clothes, Little Love is in the same clothes as her and I don't have enough for both of them with all their antics to be wearing the same clothes.
One example of antics would be IMMEDIATELY after baths last night, Little Love raced outside IN HER NEW JAMMIES to find her "snake." This little girl is IN LOVE with her snake. And she carries it everywhere and when she puts it down knows exactly where she left it. 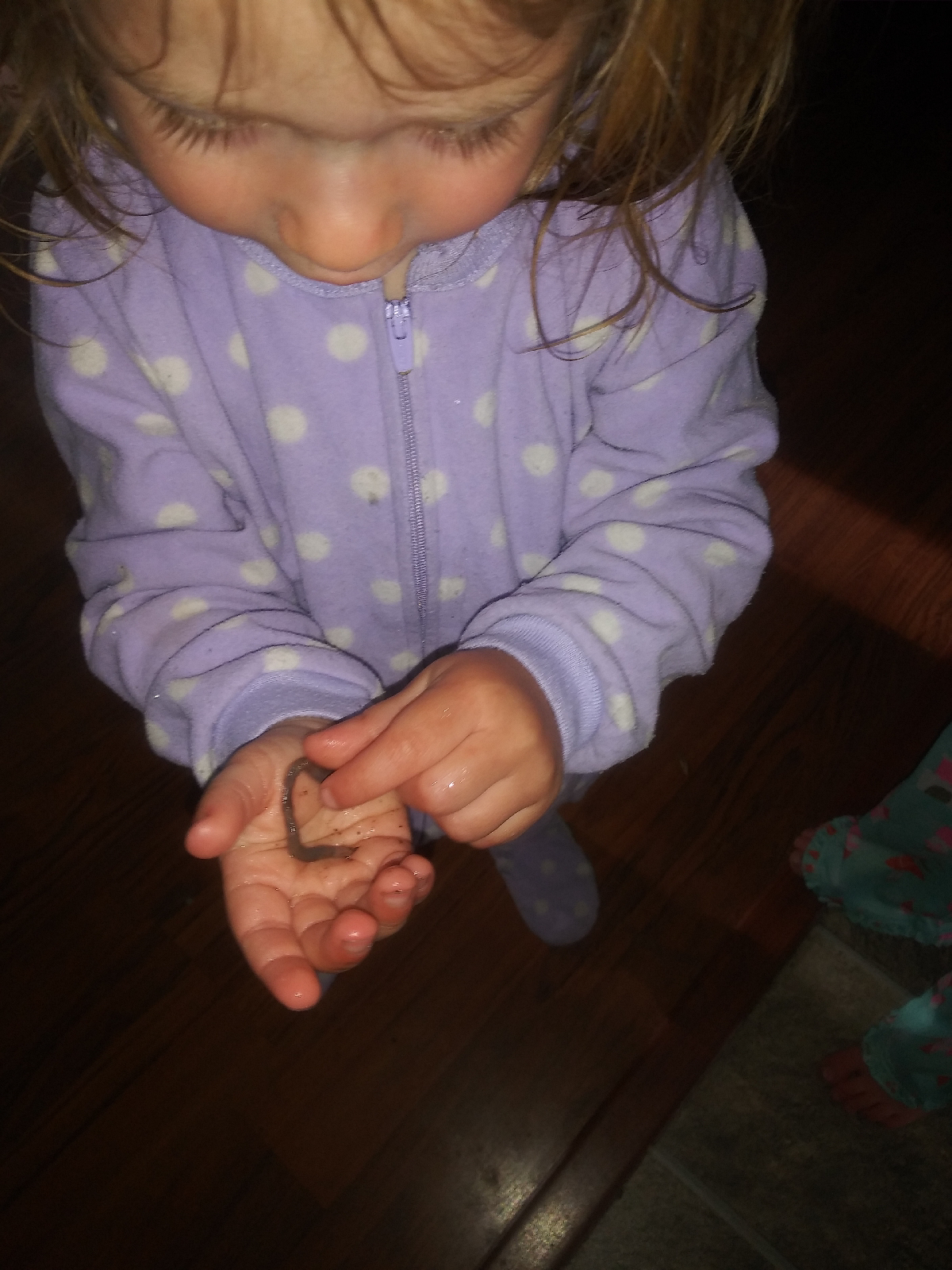 You can relax now - no my daughter is not befriending buifs (snakes in Malê). I find it funny that she calls worms snakes though ;) I REALLY want to bring her to the zoo to show her some REAL snakes so she can start calling the worms as such vs telling me she found a snake and me having that second of my heart dropping into my feet wondering if it was poisenous or not. Once this social distancing thing is over, that will be one of our first stops.
Anyways, back to 2T clothes. With two girls in basically the same size without enough same size clothes with the amount of laundry I do (not enough, I know!) I need to move Orangutan up sooner or sometimes keep Little Love in smaller a bit longer.
So this morning Oragutan got these new pants. 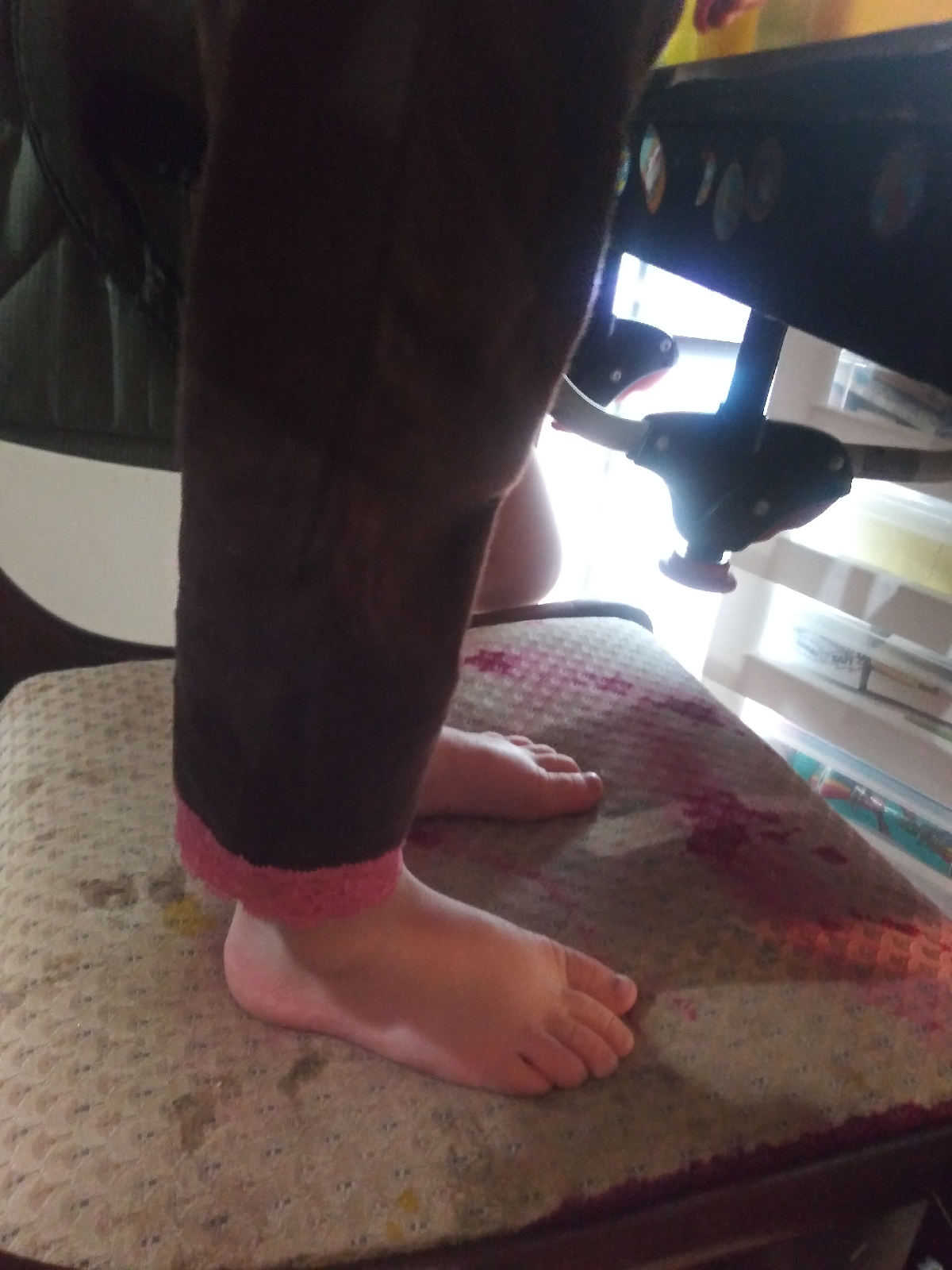 Nothing new right?W Well, for my crew - this was pretty amazing because the pants had HOLES in the bottom! WHAAAAT? Grab your popcorn and take a seat for the feature presentation:
Gymnast: Hey! You have holes in your pants Orangutan!
Oragutan: What? Nooo-oooo!
Twinkles: Yes you do! Look at the bottom!
Oragutan: Oh.... that's in-tin (interesting in Oragutan-ese)
Gymnast: Maybe we need to make it a rag. Did you know that's what mom does with clothes with holes?
Twinkles: No. You're wrong.
Gymnast: No! I'm right! Mooooom!
(I'm trying to eat my breakfast of eggs and veggies and drink my tea...)
Mom:yeah, you're right Gymnast, I do use some clothes with holes in them as rags. But not everything. So you're both right!
Oragutan: But, Mooo-oooom (she always refers to me this way - like the two toned long version of Mom...and the first Moooo sounds like Moh and the second sounds like ahm, so "Mooooh-aaahhm") Why do I have a hole in my pants?" 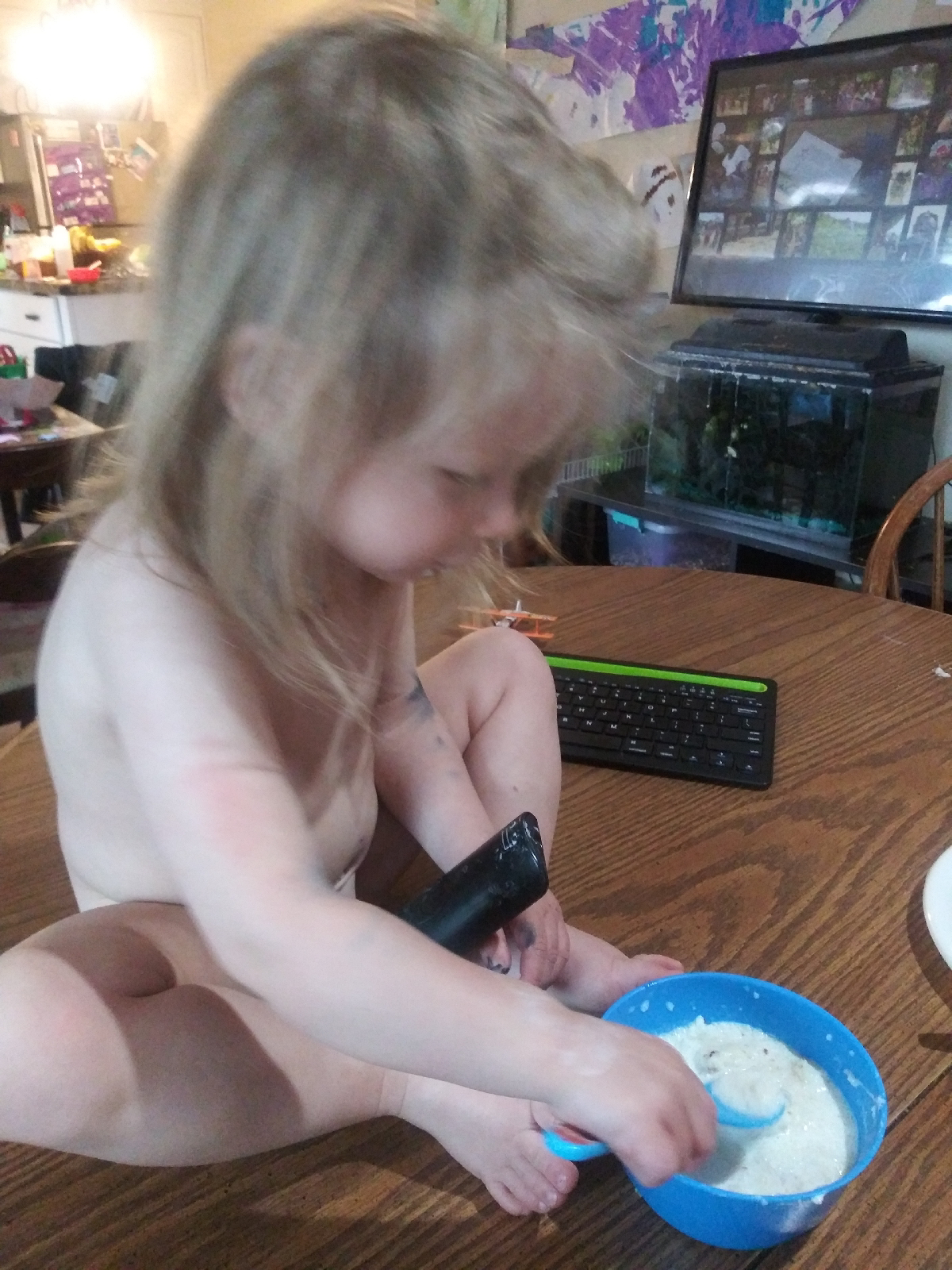 (Meanwhile, Little Love is using a remote as a phone and saying he-yo, he-yo! On the table, as nating (that's naked for you people who can't read Tok Pisin). With her hands full of "cream of corn." If you live in the South or think that it's a sin to use milk and sugar on grits, please ignore this, because if it is indeed a sin then I am living in sin and am unrepentant....)
Mom: That's not a hole, Bebe, it's...
Oragutan: I'm not a Baby Moooo-ooom! I'm a BIG Girl!
Mom: OH, I'm sorry Bikpela Meri! It's not a hole, it's called lace.
(Meanwhile, I have taken Little Love off the table, went to get a cloth to clean her up, and she has streaked across the house leaving cream of corn everywhere, lauging the whole time. So now I'm chasing a naked pikinini covered in grit cream all over the house, wondering where she's gonna pee and then play in it. Or rub it all over the place, or jump in it. Because - hey a puddle! We all love jumping in puddles, right?)
(Finally.....)
Mom: GOT ya, ya Kananka Meri! (To Little Love) Lace (to Oragutan) is just a special material. It's supposed to look like that.
Twinkles: Oh, then you can go potty in it!
Gymnast: Oh yeah. That's cool.
(Don't ask me WHERE this came from... I have no idea. Meanwhile, I came over to work on cleaning up Little Love's spot and notice the calendar. 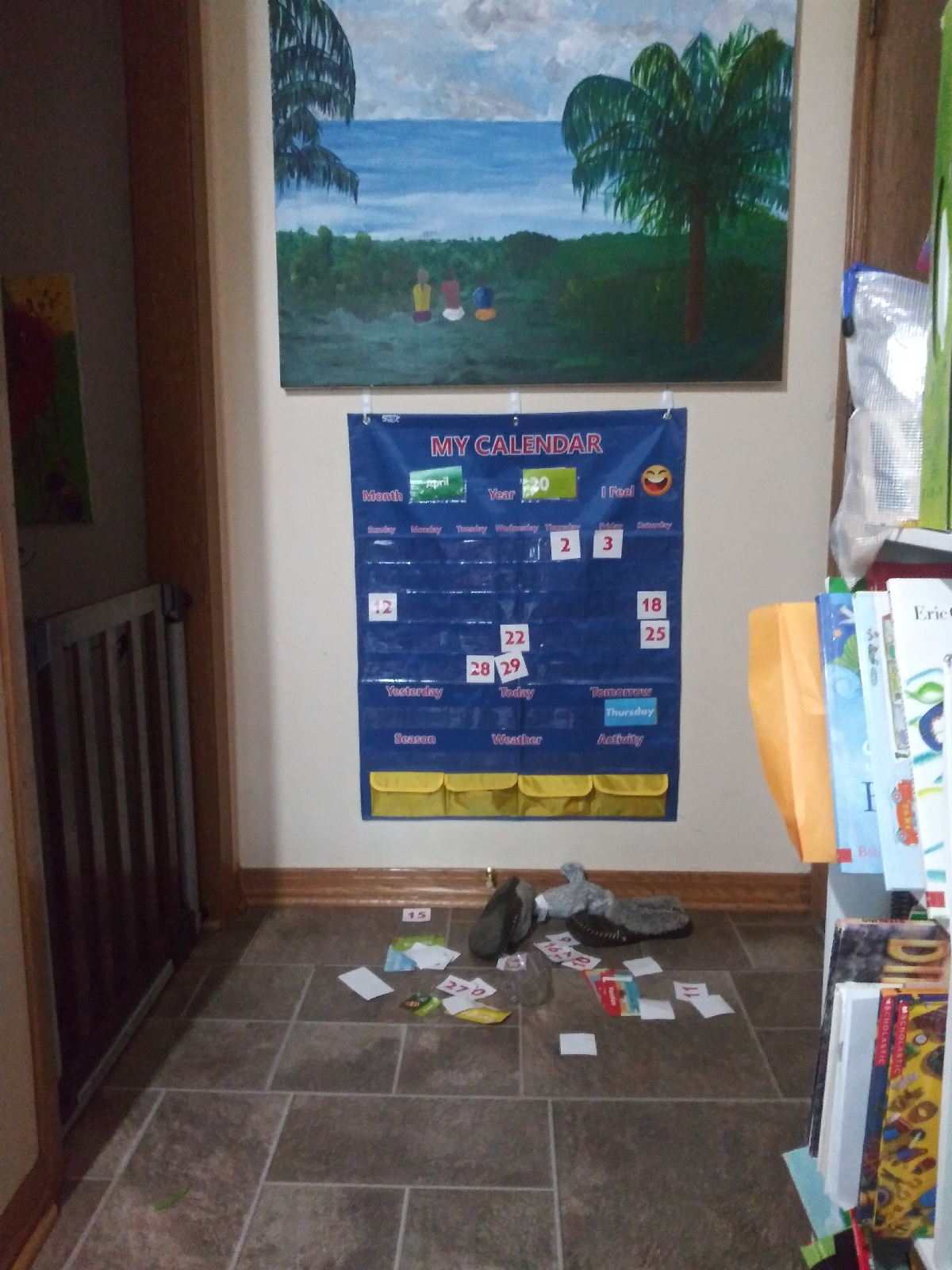 How this little 1 year old gets around to all these places to wreak hovoc is beyond me. I feel like I'm constantly cleaning up Little Love messes all day, or stopping her from making messes.)
Orangutan: I can go potty in the big potty! I'm a BIIIIIG girl! I'm gonna be 3! (holds up 2 fingers, then looks at them and pops up a third.) And Gymnast will be 6 and Twinkles will be 5 and Little Love will be TWOOOOOOOO! (Keep in mind all this is very gooped up, hence speech therapy. If you were listening and I wasn't translating for you, it would probably sound like she was speaking in toungues.)
Gymnast: You actually can't go pee in that hole - it's not in the right place for a penis.
(finally, some sense!)
Oragutan: I don't have a peeeeniiis! Girls have Jiiie-nuuuh! (I'm glad she's beginning to embrace this - a month or so ago, she was brought to tears because she wanted a penis SO BAD... but that's another story for another day... maybe. ;) )
Twinkles: No! That's impossible! Everyone HAS to pee!
(Silence...)
Twinkles: The only person in the WHOLE world who doesn't have to pee is God.
(Reverent silence since now we're talking about God.)
Gymnast: Well, he could pee if he wanted to.
Twinkles: Yeah, God can do anything.
Gymnast: He could go poop too, ya know.
Twinkles: Yeah, but where would he go poop?
Gymnast: Maybe it would just fall out of the sky?
Twinkles: Is that rain!!! When God pees?!
(At this point, I thought it wise to step in. Or else my children will be running around telling others that they are getting peed on by God. Who knows what they'll come up with next. Thunder is passing gas? Hail or... maybe tornados is poop? I don't even want to know. Anyways...)
Mom: God doesn't need to go poop or pee like we do. He could if he wanted to, and when he came to earth to be a human - Jesus - he did have to use the bathroom just iike us. But God isnt' up in heaven pooping and peeing. Rain is just water, falling on us.
And just like that, everyone excused themselves from the table and went about their business like we didn't just have one of the weirdest coversations in the world, because of new lace pants.
You're Welcome. 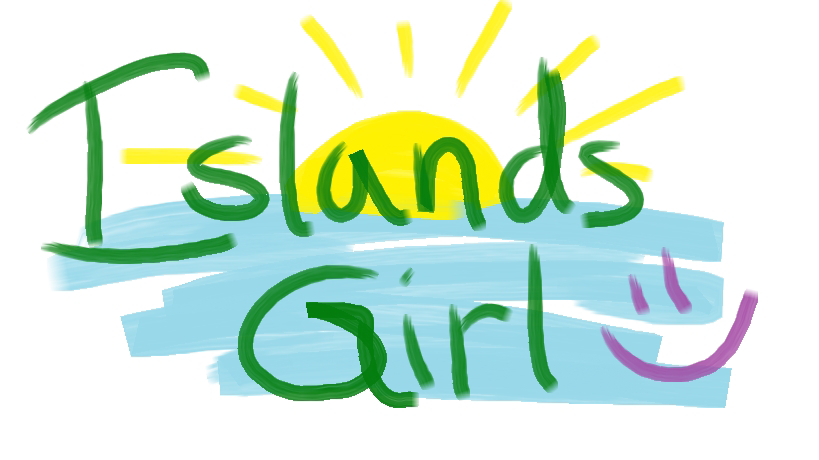